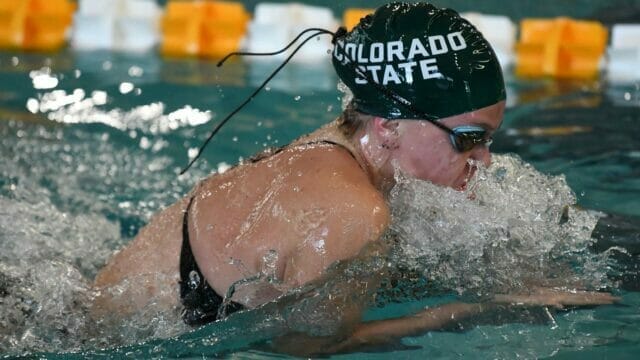 LARAMIE, Wyo. (11/5/21) – University of Wyoming swimming & diving head coach Dave Denniston emphasized to his women’s team prior to Friday’s meet against Colorado State and Colorado Mesa the importance of aggressiveness. He wanted his student-athletes to push hard during the early stages of races.

The Cowgirls put that into action at Laramie High School. It resulted in a 229-70 win over the Mavericks and a narrow 152-148 loss to the Rams.

“They came out fired up,” Denniston said. “They brought a lot of energy, cheering the whole way through, and they fought with everything they had. We didn’t have any swim that I was disappointed in. They all worked really hard out there.”

“It says a lot when the coach from Mesa says, ‘I love the grittiness of your guys,’” Denniston said. “It means a lot to hear that. I’m really proud of this men’s team.”

The men’s team improves to 1-3 on the season. The women’s team moves to 3-2 overall and 1-1 in Mountain West Conference action.

The Cowboys won 12 of the 16 men’s events Friday. That included sweeping the top-three places in three different events.

The 200-yard butterfly stood as the first such event in which Wyoming dominated. Senior Thomas Diaz won with a time of 1:53.34, while sophomores Andrew Columbus and Luke Walker rounded out the top three after logging times of 1:55.39 and 1:56.33, respectively.

Senior Grant Sloan led the pack in the 50-yard freestyle. He touched first, clocking in at 20.80, while freshman Matt Lang and sophomore Max DeYoung took second and third with times of 21.01 and 21.02, respectively.

Sophomore diver Juan Gonzalez represented the final two-win Cowboy. He won both the 1- and 3-meter competitions with scores of 301.45 and 323.90, respectively.

The 1-meter event was the third and final event where Wyoming swept the top three. Senior Brendan Byrnes and junior Payton Lee finished second and third, scoring 281.45 and 274.15 points, respectively.

Junior Daniel Cumnock-Francois rounded out the victorious Cowboys. He touched first in the 1,000-yard freestyle, clocking in at 9:57.68.

A quartet of Cowgirls claimed individual wins Friday. Fifth-year senior Katelyn Blattner led the way with a pair of victories, winning the 100-yard backstroke with a time of 56.73 and the 500-yard freestyle with a time of 5:04.14.

Senior Lainee Jones placed first in the 200-yard freestyle after registering a time of 1:52.69. Freshman Rachel Horne won the 100-yard breaststroke, clocking in at 1:04.21, and junior Melissa Mirafuentes topped the field in the 3-meter event after accumulating 321.90 points.

Blattner, Jones, freshman Lauren Swartz and senior Kira Crane teamed up to win the 200-yard medley relay, touching in a time of 1:43.88. The combo of Blattner and Jones teamed up with sophomore Kali Franckowiak and senior Sani Carsrud to win the 400-yard freestyle relay with a time of 3:28.48.

“I think there’s a lot of good energy with this women’s team,” Denniston said. “I’m excited for them to get some rest and see what they can do moving forward because I think this is going to fire them up for the rest of the season.”

Wyoming is back in action at the Missouri Invitational from Nov. 17-19 before wrapping up the fall portion of the schedule at the Corbett Invite on Nov. 20-21.

LARAMIE, Wyo. – If there was one meet Kristina Friedrichs wanted to win, it was Friday’s.

The senior captain had never beaten rival Wyoming in Colorado State career. It was a misery she shared with a long string of senior classes and with head coach Christopher Woodard. The Border War had gone to Wyoming for 12 consecutive years, and she wanted no part in leaving without changing the narrative.

Before the season began, she targeted this particular meet at a proving ground. She knew her team was strong enough to do it, but they were going to have to prove they could overcome a mental block more than anything. As the Colorado State women’s swimming and diving team has shown this year, there isn’t much you can put in their way they won’t push aside.

A broken pump at the pool hasn’t stopped them. They’ve just moved their practices to a 30-meter facility with no starting blocks. The divers have had to look elsewhere to train. So be it. Bring it on.

Even a slow start to the meet wasn’t an issue, as they overcame a 25-point deficit to the hosts at one point and came back to post a 152-148 victory at Laramie High School. Combined with the 227-71 win over Colorado Mesa, which was also there, the Rams pushed their dual winning streak to 13 consecutive to open the season, tying for third on the all-time list of consecutive dual wins.

“This is a pretty special moment,” Friedrichs said. “I’ve definitely been happy. I’ve been happy for other people at CSU swim and dive, but this is a good one. I’m not going to forget this.”

Friedrichs has three individual races on the day, and she won them all – the 50- and 100-yard freestyles and the 100 butterfly. Her only goal heading in was to give it every last ounce of what she had, and she stood up to every challenge.

Her victories in the freestyles came back to back with a break in between, and were the middle portion of a four-race run where the Rams posted victories, allowing them to overcome the gap.

“There’s always a little bubbling rage beneath the surface,” Woodard said of Friedrichs. “When she unleashes it, other people should watch out.”

Her whole intention when she saw the lineup was to win her races. Nothing less was going to cut it for her. Not good times, not good efforts, just beating people to the wall. As the meet started, the Rams weren’t doing that. Not just to win races, but to beat a Cowgirl in the lane next to them for the depth points which always add up.

As proud as she is of the way she came through, she couldn’t have asked more of her team.

“I came out here to fight. I wanted to show Wyoming we’re a challenge, we’re a threat,” she said. “I think for a long time they haven’t believed it. We’re just a hardy-har team they come out to beat every year, and I wanted to prove them wrong.

“This team is able to rebound so quickly. I think there were people in this pool tonight who had a race in the beginning that wasn’t what they thought it was going to be, and they came back fighting. Nobody rolled over and let Wyoming walk over us. If we were taken down, we came back strong. That’s what made this meet. As it went on, we didn’t crumble when things went wrong, we got stronger because of them. We came around each other and pushed each other to get to that point. I am so proud of this team for how mentally strong they were tonight.”

The divers proved it, too. The first board, the 3-meter, wasn’t their best effort of the year. The 1-meter, they turned it around and freshman Lindsay Gizzi was the first to deal a major blow as she knocked off Melissa Mirafuentes, who was second on the board in the Mountain West last year.

As they’ve done all year, the freshmen contributed, with Maya White leading a 1-2 finish in the 1,000 free with Abbey Owenby, but then the Rams went cold for a spell. Wyoming built up a lead through the next three races, bringing up the 200 butterfly.

Hannah Sykes, who has been sick all week, delivered her best race when the Rams needed it, winning in a time of 2:09.35, with teammates Kendra Preski and Madison Hunter finishing 3-4 to steal away more points.

“It came from a lot of positive self-talk,” she said of her race. “I know how I’ve been doing in practice, and I wasn’t going to let two days of not feeling good affect that. I know I can do it, so it was a lot of positive self-talk and knowing the team needed it and putting aside my own goals and putting the team first. It was knowing every point counts.

“It was cool because I think everyone understood, even the freshmen, how important this was to us all, and how important every single point was going to be, because that’s what it comes down to at the end of the day, points.”

Liza Lunina ended the four-race run for the Rams by winning the 200 back in 2:04.06, and the Rams made a switch, pulling Maisy Barbosa out and inserting Elsa Litteken, who placed fourth. From there out, the Rams and Cowgirls bounced the lead around a bit, but Barbosa helped seal the win by following Friedrich’s victory in the butterfly by pulling away for the 200 individual medley win in 2:07.25. It was her own bounce-back from her first race.

“It’s all in that. My staff did an amazing job prepping them for this, keeping them laser focused and not accepting excuses,” Woodard said. “They showed up and they delivered. I often don’t think too much about our lineup; it’s relatively straight forward. We definitely spent some time thinking about where we wanted to place kids in relation to their kids, and we did have to make some changes. Again, credit to the kids. When we tell them change is coming, to be unfazed by it. Where do you need me was the attitude.”

Anika Johnson had three strong races, including placing second behind Friedrichs in the 100 fly. Olivia LeBlanc was inserted into the 500 free, and she produced a fourth-place finish with Owenby in fifth.

Barbosa’s win gave the Rams some room to where all they had to do was take second in the closing 400 free relay, which the Rams did. On the deck, the team was electric. Over the course of the final four races, it was mixed with serious doses of nerves and anticipation.

As much pressure as Sykes put on herself to win her race, it was nothing like watching her teammates swim.

“I lost my voice, as you can tell,” she said. “When you’re not in it, it’s so much more nerve-wracking. It’s totally out of your control, but it’s cool, because I just know how hard everyone has been working. It’s a different amount of nervous.”

As the team celebrated on the side, Sarah Mundy, who anchored the final relay, asked Woodard what her split was. He shot back, with a smile, “who cares? We won.”

To which Mundy laughed. It was an unknown feeling for all of them, and a long time coming.

“We just wanted it. I’ve been here four years. We wanted it, but I think this was the first year we all kind of realized we can do it,” Friedrichs said. “We have the team, we have the depth, we have the mental fortitude to challenge this team, and I think we all knew that coming into this meet. I just wanted to go for it, leave nothing behind.”

Nothing except a long drought. The Rams left that in Laramie.