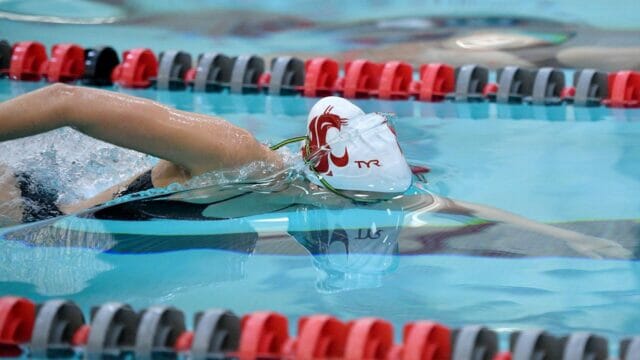 Washington State heads to Los Angeles for a pair of Pac-12 Conference meets. The Cougars face No. 17-ranked USC Friday at 2 p.m. and UCLA, Saturday at 11 a.m. Friday’s meet at USC will be webstreamed and Saturday’s matchup at UCLA will not.

LAST TIME OUT
The Cougars went toe-to-toe with No. 22 Arizona State at Gibb Pool October 16, claiming five races but dropped a 157-105 contest. WSU battled the No. 22-ranked Sun Devils throughout the meet, winning four straight events at one point and closed the day with big win in the 200 free relay. Senior Taylor McCoy led the way with a 17 points.

WSU KNOCKED OFF ARIZONA FOR 1ST TIME IN PROGRAM HISTORY
WSU made history Oct. 15, posting its first win over Arizona in program history with a 131.5-129.5 victory at Gibb Pool. The Cougars entered the meet having dropped all five of the previous meetings with Wildcats before collecting seven individual victories in the conference opener. Senior Taylor McCoy led the way with a meet-best 21 points after winning the 200 back and 200 IM while five different Cougars collected wins (Chloe Larson, Lauren Burckel, Mackenzie Duarte) including a pair of freshmen, Noelle Harvey and Angela Di Palo. WSU’s top 400 medley relay team finished second to clinch the win.

COUGARS OPEN SEASON WITH WIN AT IDAHO
WSU opened its season with a 166-128 win over Idaho. The Cougars won 11 of the 16 events that saw Idaho claim 32 points on both diving events (WSU does not have diving). Senior Taylor McCoy led the way with three individual wins while freshman Angela Di Palo from Italy won her first two collegiate races in the 200 free and 100 free. Senior Lauren Burckel recorded an early win in the 100 breast and freshman Ilaria Moro from Italy won the 200 fly. WSU began to make their move by sweeping the top-3 spots in the 50 free as senior Paige Gardner earned her first career win, sophomore Hailey Grotte finished second and junior Mikaela Kirton touched third. Seniors Mackenzie Duarte (200 breast) and Keiana Fountaine (500 free) each added wins before the Cougars closed the meet with a win in the 200 free relay.

COUGARS EARNED CSCAA SCHOLAR ALL-AMERICA HONORS
Washington State earned CSCAA Scholar All-America Team honors for the tenth straight semester this past spring with a WSU-record 3.72 team GPA. The Cougars, who have earned the honor in all six semesters under head coach Matt Leach, have earned the honor 20 times in program history and the 3.72 team GPA was the highest team semester GPA in Washington State Athletics history.

CHLOE LARSON COMPETED AT 2021 NCAA CHAMPIONSHIPS
Senior Chloe Larson produced an impressive showing at the 2021 NCAA Swimming Championships in Greensboro, N.C. Larson also qualified in the 100 freestyle and posted a 48.88 in the preliminaries, tying for No. 23 in the country, improved 12 spots from her initial seed and good for the second-fastest time in program history. The Rapid City, S.D. native finished three-tenths of a second from earning a spot into the evening final but finished her season with the top two 100 freestyle times in WSU history after breaking the school record at the Pac-12 Championships in February. In the NCAA 50 freestyle preliminaries, Larson recorded a 22.37, good for No. 25 in the country but just missed from earning a spot into the final (Top-16). Larson finished the season with the top three 50 free times in program history. Larson was the second Cougar in the last three seasons to earn a trip to the NCAA’s, joining fellow teammate Mackenzie Duarte who earned an invite in 2019.

THREE COUGS COMPETED AT U.S. OLYMPIC TRIALS
Three Washington State swimmers competed at the 2021 U.S. Olympic Trials this past summer. Seniors Mackenzie Duarte, Chloe Larson and Taylor McCoy each competed for a spot on the U.S. Olympic team. Duarte competed Wave I in the 200 breaststroke and posted a 2.35.12, good for No. 16 in the group and moved her to the Wave I “B” Final where just missed out on advancing to Wave II. The Walnut Creek, Calif. native earned the qualifying time at the U.S. Open in 2019. Larson competed in the 50 freestyle in Wave II and tied for No. 13 with a 25.42 to advance to the semifinal round. The Rapid City, S.D. native posted a 25.35 in the semifinal, the No. 14 time in the country but just short of advancing to the final. Larson qualified in the 50 free after recording a 25.26 split during the 100 freestyle at the long course meters event at the 2021 St. George Sectional Meet in Utah. McCoy competed in the 200 backstroke and posted a 2:14.00, the second fastest time in the Wave I to advance to the “A” final but missed the Wave II cut. The Pullman, Wash. native recorded the qualifying time in the summer of 2019. The last Cougar swimmer to compete in the Olympics was Rugile Mileisyte who competed in the 50 free at the 2008 Olympics in Beijing for Lithuania.

LARSON MADE HISTORY AT 2021 PAC-12 CHAMPIONSHIPS
Senior Chloe Larson made history last February, giving Washington State its first Pac-12 Conference individual champion in program history with a win in the 50 freestyle at the conference championships in Houston. Larson won the final by touching the wall in 22.18, six-hundredths of a second ahead of the three swimmers from UCLA, CAL and USC who all tied for second. In the morning preliminaries, Larson recorded a school-record time of 22.16 in the same event, breaking Cougar legend and Lithuanian Olympian Rugile Mileisyte’s previous mark of 22.45 set in 2009. Larson capped her week with a program-record 100 free in the morning preliminaries (49.00) and again in the evening “B” final (48.74).

WSU SET TEAM RECORD AT PAC-12 CHAMPIONSHIPS
Washington State closed the final day of the 2021 Pac-12 Conference Championships in Houston with another school record and finished with the highest team score in program history. The Cougars tallied 533 points, the most scored in a Pac-10/12 Conference Championship Meet since totaling 793 points at the NorPac Championships in 1985-86. In the four days in Houston, WSU recorded nine Top-10 times including school records in the 50 and 100 free by Chloe Larson.

KATE MOORE ADDS TITLE OF RECRUITING COORDINATOR
Assistant Coach Kate Moore has added the title of recruiting coordinator to her duties, Head Coach Matt Leach announced in July. Kate Moore begins her second season at Washington State and recently brought in the seven-member 2021 recruiting class that features swimmers from Italy, Spain, California, Minnesota and Texas. “Kate has done an amazing job finding recruits the fit the mold of our family. Family first, academics second and competing third is exactly what we look for and Kate has been outstanding at bringing student-athletes into our program who can add to our family first culture,” Leach said. “It is my pleasure to elevate Kate Moore to Recruiting Coordinator. Go Cougs!”