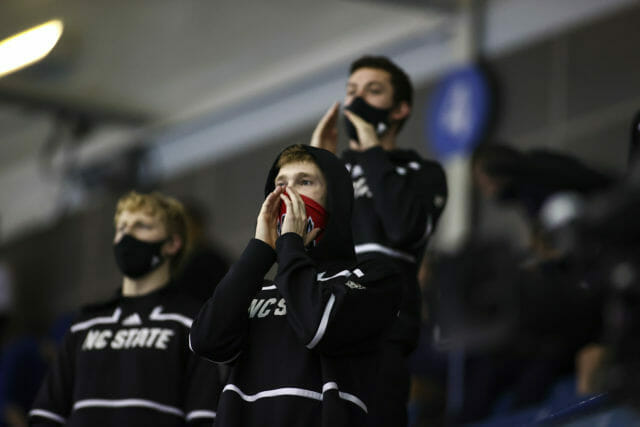 The Tennessee Volunteer men and women traveled east to Raleigh, NC, over the weekend to take on the NC State Wolfpack over two days. NC State successfully defended their home pool on Friday, with the women winning 182-118 and the men 205-95. Additionally, the two teams competed in an unscored exhibition meet on Saturday, which featured a rearranged event lineup and a chance for swimmers to compete in different events than they did on Friday, for the mot part. It appears that neither team was wearing tech suits for the meet.

The Wolfpack men threw down the gauntlet early on Friday, crushing a 1:24.92 in the 200 medley relay. Kacper Stokowski (21.54), Rafal Kusto (24.44), Nyls Korstanje (20.10), and David Curtiss (18.84) combined with splits that would be largely solid come championship season, much less October. That’s just 0.01s behind Michigan’s time from the SMU Classic a week, which currently stands as the fastest time in the NCAA so far this season.

Freestyler Luke Miller also doubled, touching first in both the 100 and 200 freestyles with times of 43.68/1:34.98. Additionally, he had the fastest split in the field in the 400 free relay, going an impressive 42.73 on NC State’s ‘A’ 400 free relay. Noah Henderson added in a very strong 43.26 anchor leg on the ‘B’ relay; while it’s early, NC State is looking like they could very well be back in contention for the 400 free relay title this year. Miller also clocked a 46.90 in the 100 fly during Saturday’s exhibition meet.

While NC State was impressive, Tennessee had several fast swims as well. Jarel Dillard won the 100 breast in a quick 52.84, followed by teammate Michael Houlie at 53.50. He also came out on top in a 200 breaststroke dual with NC State’s Rafal Kusto, winning 1:56.71 to 1:56.80. Additionally, Dillard and Houlie each split sub-24 on Tennessee’s medley relays.

RALEIGH, N.C. – The Wolfpack added to its season-opening set of sweeps on Friday night after beating Tennessee. It was the team’s second dual sweep of the week following both the men’s and women’s swimming and diving teams defeats over the Tar Heels earlier in the week.

The Wolfpack women defeated the Lady Vols 182-118, and the men of NC State sailed past Tennessee with a 205-95 victory.

NC State’s men absolutely dominated the meet as they dropped just three races on the way to their victory. In total, the Pack men swept the podium in four total races, and four members of the squad picked up multiple top finishes.

In the men’s 50-yard freestyle, Nyls Korstanje (19.66), David Curtiss (19.74), and Noah Henderson (19.78) swept the podium and broke the 20-second barrier. Additionally, Korstanje took home another individual event title, touching the wall first in the 100-yard butterfly with a time of 46.41

Kacper Stokowski, Hunter Tapp, and Michael Moore rounded out the evening of sweeps by taking the top three spots in the 200-yard backstroke. Stokowski finished the event with a time of 1:43.83, while Tapp went 1:44.38 and Moore right behind him with a time of 1:45.73.

Luke Miller showed his freestyle dominance by picking up a pair of first place finishes in the 100 (43.68) and 200-yard (1:34.98) freestyles. The top spot in both the 100 and 200-yard backstroke belonged to five time All-American Stokowski.

RELAY HIGHLIGHTS:
The Pack kicked off the meet Friday evening with solid first-place 200-yard medley relay finishes on both sides. The women’s quartet of Berkoff, Hansson, Alons, and Heather Maccausland captured the top spot with a time of 1:36.92. Stokowski, Rafal Kusto, Korstanje, and Curtiss combined their efforts to finish at 1:24.92. The NC State men’s B relay finished just under two seconds behind the A squad (1:26.80), out touching both of the Volunteer relay lineups.

NC State rounded out its Friday night win with a sweep in the 400-yard freestyle relay. The Wolfpack women’s team of Abby Arens, Berkoff, MacCausland, and Abbey Webb just out touched Tennessee by a mere 0.14 seconds to win the team’s last event of the evening. On the men’s side, both of NC State’s foursomes finished ahead of the Vols, highlighted by the fastest time of Sam Hoover, Miller, Tapp, and Bartosz Piszczorowicz (2:53.36) (something is wrong with the final results)

DIVING HIGHLIGHTS:
Wolfpack junior Helene Synnott picked up her first win of the season on three-meter with a score of 307.13, followed by runner-up teammate Ashton Zuburgwith 296.48 points.

UP NEXT:
The matchup between the Wolfpack and Volunteers resumes mid morning on Saturday, with a lineup of exhibition events to finish out the weekend, set to begin at 10 a.m. in the Casey Aquatic Center. The NC State Wolfpack then travels to face the Auburn Tigers and Kentucky Wildcats at a tri-meet held in Auburn, Ala. next weekend.

RALEIGH, N.C. – Tennessee swimming and diving came up short Friday night at NC State, as the Vols and Lady Vols fell to a pair of top-five foes at the Willis R. Casey Aquatic Center.

The women dropped the meet 176-124 to the No. 3 Wolfpack, who finished as the national runner up last season. While the men had some impressive moments throughout the meet, fourth-ranked NC State came out with the 205-95 victory.

“There were a number of impressive, committed efforts for the men today,” associate head coach Rich Murphy said. “Jarel Dillard continued his inspirational career with two breaststroke wins. Kayky Mota scored a lot of points for his team, including a win in the 200 fly, which was timely and gave our men an added boost. Jordan Crooks made a big contribution, once again, and helped his teammates. Fellow freshman Gus Rothrock and sophomore Harrison Lierz continue to make strides. We look forward to their ongoing contributions. We will learn the lessons from today and be better for it moving forward. We appreciate the competitiveness of NC State in their home pool.”

Mota had a dominant showing in the 200 butterfly, notching an NCAA B Cut time of 1:45.76 to finish first by nearly two seconds. Crooks recorded the second-best time in the 100 freestyle with a mark of 44.22. He would throw down a personal-best 43.94 split in the 400 freestyle relay, helping the squad to a third-place finish to end the meet.

In diving, both Grace Cable and Bryden Hattie won both the 1-meter and 3-meter springboards for the second-straight meet. Bryden posted scores of 319.28 and 353.25, respectively. Cable recorded the best women’s score on the 1-meter at 299.48 and followed it up with a 301.83 3-meter mark.

“We competed here years ago, but I never remember coming to a meet where the conditions were as tough and adverse for the divers as they were today,” diving coach Dave Parrington said. “The environment and facility lend itself to being a tough place to dive in. It is extremely loud. I was really proud of our divers for the way we handled an enormous amount of adversity. Sweeping all the events is a real credit to our team. We didn’t have our best day, but I’m proud of the way our divers competed and handled themselves.”

One of the bright spots on the day for the women was when freshmen Julia Mrozinski (1:47.81) and Brooklyn Douthwright (1:48.54) finished first and second in the 200 freestyle. Douthwright also took second in the 100 free with a time of 50.02, while Mrozinski nabbed third.

Two of the best races came in the women’s 100 and 200 breaststroke between Olympian Mona McSharry and NC State’s Sophie Hansson, who is the reigning NCAA champion in both events. The two were neck and neck in both races, but McSharry narrowly missed getting the wins, finishing second with a pair of NCAA B Cut times.

Jasmine Rumley (2nd/22.80) and McSharry (3rd/22.98) were part of a 50 freestyle race where first to third was determined by 0.32 seconds. Kristen Stege notched a second-place finish in the 500 free with a time of 4:53.02, while Aly Breslin and Summer Eaker also scored points in the event.

The Lady Vols narrowly missed getting the win in the 400 freestyle relay by 0.18 seconds. Mrozinski, Douthwright, Rumley and Tjasa Pintar teamed up to post a time of 3:19.56. UT also finished second in the 200 medley relay (1:39.42) with a lineup of Olivia Harper, McSharry, Trude Rothrock and Rumley.

“Lady Vol swimming and diving competed relentlessly today,” associate head coach Ashley Jahn said. “I’m proud of the effort from all of our athletes. We were exposed in areas that we need to be better, and yet, I see a lot of improvement already this season. There was great leadership from our veteran athletes, and everyone was tested in the competitive environment that NC State created. We grew today as a team, and we are looking forward to tomorrow morning.”

The two squads will face off again Saturday morning at 10 a.m. for a B meet, but that competition will not be scored.

Up next, Tennessee will host Louisville (Oct. 21) at Allan Jones Intercollegiate Aquatic Center for its home opener. The meet starts at 2 p.m. and will be honoring UT’s Olympic Tradition, with past and present Olympians being recognized and LVFLs Erika Brown and Molly Hannis signing autographs for fans during the meet.