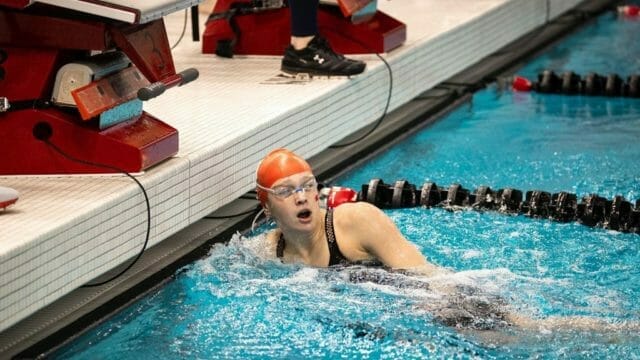 Wisconsin has extended its series lead over Minnesota after sweeping both teams in Friday’s “Border Battle.”

Last season, both of Wisconsin’s teams finished ahead of Minnesota at Big Ten Championships. This meet marks Minnesota’s first losses of the season.

Freshman Aslan scored the team’s first win when he took first in the 1000 (9:03.79). The distance swimmer is from Turkey, and in 2019 he won the Turkish SC Nationals title in the 800 free. He later improved on that mark, winning the 2021 SC European Junior Championships title in the 800 and making Turkey’s Olympic roster in the event. His distance times converted also suggest he has NCAA scoring potential.

Aslan also won the 500 free in 4:24.69, his fastest time of the season by just over two tenths of a second. In this race, he also edged out Bar Soloveychik, keeping the Minnesota freshman from any event wins.

Sophomore Newmark won the 200 free, beating Soloveychik by almost three seconds. Newmark made the C final in the event at the 2021 Big Ten Championships, ahead of any Minnesota swimmer.

Later in the meet, Newmark would also win the 100 free in 44.52, ahead of Minnesota sophomore Lucas Farrar.

Junior Wes Jekel won two individual events for the Badgers. His 100 backstroke time of 48.03 was his fastest of the season and earned him first place, though after making A finals in every individual event he swam at Big Ten Champs last season, his top performance doesn’t come as much of a surprise. Jekel also won the 200 IM in 1:48.53, his fastest time of the season by over five seconds.

Minnesota junior Gavin Olson managed to keep Jekel from amassing three individual wins by beating him in the 200 backstroke by .08. Olson’s winning time of 1:46.46 is also his fastest time of the season so far.

Other notable performances from Wisconsin’s upperclassmen include: fellow junior Drew Nixdorf winning the 200 butterfly in 1:47.98, and senior Erik Gessner winning the 100 fly in 48.30.

Minnesota didn’t let Wisconsin escape with all of the victories, however. Max McHugh, the NCAA’s best breaststroker last season, swept both breaststroke events at the meet, winning the 100 in 52.73 and the 200 in 1:56.14.

He’s still decently off his best times from last season in the events. His best in the 100 breast last season was 50.18 and his 200 breast best time was 1:49.02. These times were swum at NCAA Championships, however, with the help of tech suits.

Sophomore Farrar won the 50 free, swimming the event in 20.07. He was also the youngest swimmer in the event grade-wise, competing against juniors and seniors.

The Wisconsin freshmen met Minnesota for the first time on Friday, and proceeded to win four individual events.

Paige McKenna was the first Badger freshman to win an individual event, notching a 9:47.70 in the 1000 free, ahead of second-place Abbey Kilgallon by over 13 seconds. McKenna was the number six recruit in our 2021 re-rank, and she swam her season best by almost 12 seconds, crushing her previous swim of 9:59.08 at the Hawaii-Arizona tri-meet.

Mackenzie McConagha, another Wisconsin freshman, won the 200 fly in 1:57.25. She beat Megan Van Berkom, whose 200 fly performance at the Minnesota/Nebraska dual meet was best in the Big 10 at the time.

Other notable performances from Wisconsin include NCAA 200 backstroke champion Phoebe Bacon’s 1:57.17 win in the event and her 54.02 win in the 100 backstroke.

On Minnesota’s side, Cornish was able to secure an individual event win in the 100 free with a time of 49.96. That time is also her personal best.

Finally, NCAA champion diver and fifth-year Sarah Bacon swept both the 1- and 3-meter boards, with scores of 334.5 and 371.78. Both scores are the highest for the team so far.

Both Minnesota and Wisconsin return to action Dec. 1 at the Minnesota Invite.