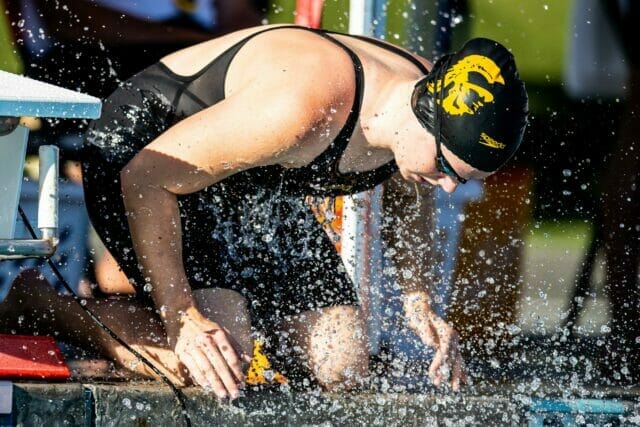 The University of Southern California’s men’s and women’s teams both led the team standings at the conclusion of Day 1 of the 2021 Art Adamson Invitational. The Trojan women won every event on the first night of competition. Kaloyan Bratanov ended the USC men’s winning streak, getting to the wall first in the 200 IM. Read about all of Wednesday night’s finals races in the Day 1 Finals Recap.

The USC relay consisting of Anicka Delgado, Laticia-Leigh Transom, Calypso Sheridan and Kaitlyn Dobler opened the first night of finals with an electric 200 free relay. They touched in 1:28.35, with a comfortable two-second lead ahead of the other teams.

The men’s 200 free relay was a close race until the end. USC’s Max Saunders anchored the relay, pulling away from the crowd. Saunders, Artem Selin, Nikola Miljenic, and Mateo Parker finished in 1:17.95 for the second-fastest time in the country this season.

Austrian Olympian and USC freshman Marlene Kahler held off Texas A&M’s  Chloe Stepanek to win the women’s 500 free. Kahler won the event in 4:43.35 and remains the second-fastest 500 freestyler this season.

USC swept the top four spots in the A-final of the women’s 200 IM. Isabelle Odgers got her hand on the wall first at 1:55.89. Second-place finisher Calypso Sheridan holds the fastest time so far this season (1:55.76), which she went at the Trojan Invite.

Texas A&M’s Kaloyan Bratanov ended USC’s winning streak when he won the men’s 200 IM. His time of 1:43.46 was temporarily the fastest time in the country this season. Danny Kovacs later topped that time at the Mizzou Invite.

The Trojan women had another clean sweep in the 50 free. Dobler finished first in 22.09, followed by teammates Delgado and Transom.

Olympian Brooks Curry took home an individual title on the first night of finals. He went a nation-leading time, going a 19.09 in the 50 free.

Sheridan, Dobler, Delgado, and Transom closed the night out strong for USC. They won the women’s 400 medley relay in a time of 3:31.79. They dominated the field, touching first by five seconds.

Evangelos Makrygiannis, Trent Pellini, Nikola Miljenic, and Alexei Sancov closed day 1 of racing with a win for the Trojans. They took over Texas A&M’s lead after the backstroke and extended their lead until the end for a time of 3:06.12.