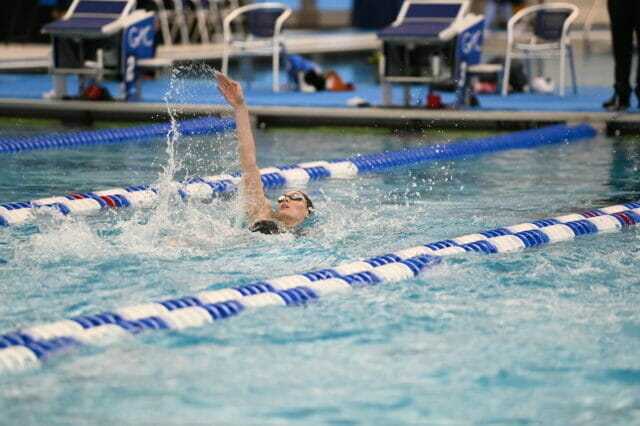 UVA and Texas wrapped up a two-day dual meet Saturday morning. The UVA women downed several AFC pool records and improved nation-leading times in events like the 400 medley relay, the 200 back (Alex Walsh), and the 100 free (Gretchen Walsh). Both teams had plenty of fast swims, but the Cavalier women ultimately won 201-152.

Walsh’s leadoff time also moves her up #1 in the nation this season, ahead of Maggie MacNeil’s 51.09 from the SMU Classic. That time would’ve put Walsh 6th in the individual 100 back at last year’s NCAA Championships.

Texas got a 52.78 backstroke leadoff by Olivia Bray, then Anna Elendt split 58.90 on breast, Kelly Pash went 52.07 on fly, and Bridget Semenuk actually just outsplit Walsh’s anchor with a 49.07. The combined time of 3:32.82 was also under the old pool record, and moves the Longhorns to #4 in the nation this season.

Emma Weyant took over the lead by the 100 mark and never relinquished it, touching first in 4:46.11. That’s a season-best for Weyant by nearly a second, and moves her up to #5 in the nation this season.

After winning the first two events of the morning, UVA now leads 127-114.

Nelson moves to #2 in the nation, behind only Kate Douglass‘ 2:07.68 from last weekend.

It can be a bit tough to keep track of these sort of things when you’ve got two sisters with such crazy versatility, but remember that it was Gretchen Walsh who won the 100 back yesterday and went sub-51 leading off UVA’s medley relay earlier this morning. Bray has taken 2nd in both backstroke events this meet.

The UVA women have steadily built their lead, and the score now stands at 155-124.

Gretchen Walsh built nearly half-a-body-length led by the halfway point, and she extended that lead on the back half to throw down a fast 48.00. That times breaks Mallory Comerford’s pool record of 48.37 from 2017, and it also shaves 0.02s off of her already-nation-leading best time.

Another pool record goes down, at Kate Douglass blasted a 51.99 to win by nearly a second. Her time broke the pool record of 52.19, set by Alex Walsh last year. Douglass owns the fastest time in the nation this season, a 51.51 from the Cal dual meet a few weeks ago. Texas got 2nd and 3rd place finishes from Emma Sticklen (52.91) and Olivia Bray (53.07).

Fans were treated to another great race here. Texas’ Kelly Pash went out in 54.93 to take the lead, but UVA’s Ella Nelson split 33.82 on the breaststroke lead to take a narrow lead. Nelson hung on on for the free leg to touch out Pash, 1:57.33 to 1:57.46. Those times now rank 4th and 5th, respectively, in the nation this season.

Texas got four pretty event splits to go 1:30.08, which puts them at #6 in the nation this season.