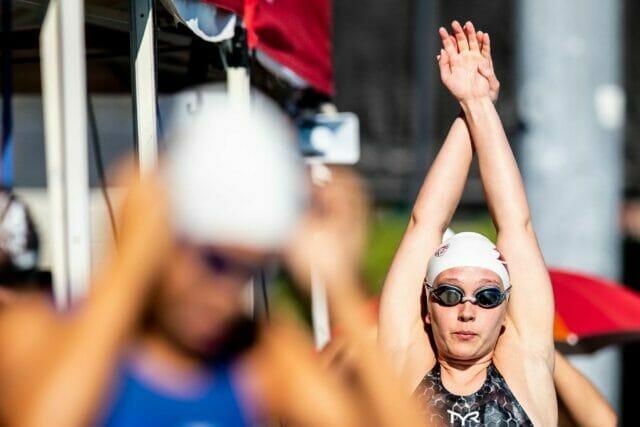 The Washington State Cougars picked up a hallmark win in the 3rd meet of their 2021-2022, slipping by the Arizona Wildcats at home by a score of 131.5-129.5 on Friday morning. The Cougars are now 2-0 in dual meets this season.

That win marks the first-ever victory for Washington State in the head-to-head series between these two Pac-12 opponents.

The two teams didn’t face off for the first time until the 2012-2013 season, where Arizona won 119-75. Arizona has won all 5 previous matchups between the teams, with an average score of 157-94 in favor of the Wildcats.

Preliminary information available to SwimSwam indicates that neither team was wearing technical racing suits for the meet.

The meet featured only swimmers. Washington State doesn’t sponsor a diving program, but there were no divers at these teams’ last two matchups either, both of which were won handily by Arizona.

So, even with that context, the result shows a possible shifting of power in the Pac-12 Conference.

“This is a big win for our Family!” Leach told SwimSwam after the meet. “We have always preached Family 1st, Academics 2nd, and Competing 3rd. These Cougs are hungry to continue to elevate and raise the bar day in and day out. Our TEAM did this because of our FAMILY bond. I’m so proud of everyone and we are looking to continue improving day in and day out! Go COUGS!”

Leach is entering his 4th season leading the program, arriving in 2018 from Indiana State.

Taylor McCoy led all individual scorers in the meet with 21 points. That included wins in both the 200 backstroke (2:03.22) and 200 IM (2:05.86). Those are both races that she swam at the Pac-12 Championships last season, finishing in the B final of both races. There was no 400 IM on the meet lineup – that’s her best event, and one where she finished 8th at Pac-12s last year.

McCoy is building off a breakthrough long course summer that saw her make 4 A-finals in 4 events at the Speedo Summer Championships – West meet in early August. That included a best time of 4:53.56 in the 400 IM.

Julia Heimstead also picked up two wins for the Wildcats, topping both the 100 fly (55.89) and 200 fly (2:03.75). She won the latter race by almost three seconds. She was a Pac-12 A-finalist in the 200 fly last season, where she finished 7th in 1:59.73. Heimstead was already 2:00.47 at last week’s SMU Classic. She appears to be set up for a big sophomore season, even though she didn’t race in an official meet between last year’s Pac-12 Championships and last week’s SMU Classic.

But it was the surprising depth of the Cougars that wound up carrying the day. Lauren Burckel won the 100 breast in 1:04.31 and had three top-3 finishes. That 100 breast time is two-and-a-half seconds better than she was last week at the Chik-Fil-A invite and is a season-best by 8-tenths.

Mackenzie Duarte won the 200 breast for Washington State ahead of Burckel’s second-place finish, and similarly had three top-3 finishes. Her 2:18.46 was similarly a season-best for her, but more than two seconds, as the Cougars were much better than they were last week almost across-the-board.

This result continues an inauspicious start for the Arizona women, who were 6th out of 6 teams at last week’s SMU Classic. Hannah Farrow, the team’s top swimming scorer at Pac-12s last season, swam just 1 race at the meet, finishing tied-for-5th in the 100 breaststroke.

Arizona finished 6th and Washington State finished 7th at last year’s Pac-12 Championships. There are 8 teams that sponsor women’s swimming programs in the Pac-12, but Arizona State redshirted the entire 2020-2021 roster because of the COVID-19 pandemic.

Arizona will be back in the water next weekend when they host Wisconsin and Hawaii in Tucson. Washington State will race Arizona State on Saturday in Pullman as part of their double-header block against the conference’s Arizona teams.