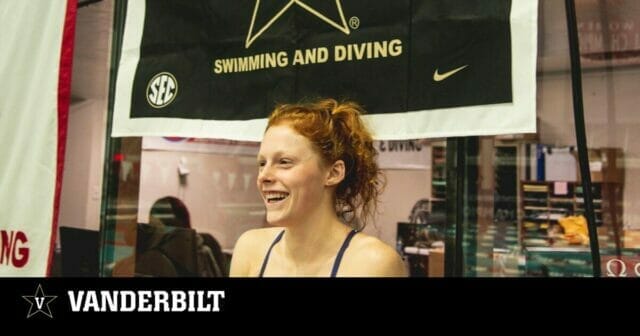 The FGCU Eagles took Vanderbilt down to the wire, but the Commodores finished 1-3 in the final relay to seal up an 8-point margin on Saturday on the road in Fort Myers.

Neither team wore technical racing suits for the meet.

It was the 2nd matchup in 3 seasons between Vanderbilt of the SEC and FGCU, one of the top mid-major programs in the country over the last decade. In 2019, Vanderbilt won 172-121 at home, but this year’s meet was much closer.

FGCU led at the halfway mark, but a 23.33 third leg from Tonner Debeer of Vanderbilt, the fastest split of the field, pulled the Commodores into the lead. She handed to Chantal Jordan, who anchored in 23.39, and Vanderbilt’s back-end eventually pulled away to win 1:34.15-1:34.90.

That win secured the meet, with 2 more points for a third place finish added on for good measure.

Halmai raced on a mixed medley relay for her native Hungary at the Tokyo 2020 Olympics.

Among the best individual performances for the victorious Commodores was a 1:52.89 from Eleanor Beers in the 200 free. That led the field by over two seconds, and was half-a-second better than she swam last week against Arkansas and Drury.

After spending the summer training back home with the Bainbridge Island Swim Club in Washington, she was also four-tenths faster in the 100 free (52.51) than she was at a dual meet a year ago today, which was the team’s opener (52.69). She was 3rd in that event, behind Florida Gulf Coast’s Brittney Pike.

Vanderbilt is now 2-1 on the season in dual meets. They’ll race again in two weeks against Illinois. Florida Gulf Coast is 0-1 in dual meets, though they did win the North Florida Invitational in their season-opener. They race again on Friday, Oct. 22 against Miami.