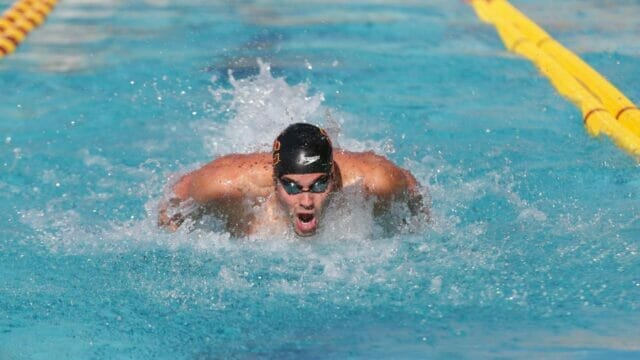 The USC men took down the UCSB men on Friday in the first dual meet for both teams of the 2021-22 season. The Gauchos traveled to Los Angeles to take on USC at home in what constituted the first part of a two-meet weekend for both UCSB and the Trojans.

The USC women raced Washington State, which only sponsors women’s swimming, in a parallel meet. That meet was recapped separately here.

For both teams, the freshmen performed well, and for UCSB it was the rookies’ collegiate debut.

USC freshman Daniel Matheson kicked off the individual events with a win in the 1000 free. His time of 9:20.89 was eight seconds faster than the second place finisher, UCSB freshman Taber daCosta. Matheson jumped to the number 20 recruiting spot after a phenomenal 2020-21 season. His improvements in the 500 and 1000 freestyle (4:20/9:02) propelled him toward the top of his class in those events, and his success helped make USC the number seven team for recruits.

Selin was a big-time recruit for the Trojan, and so far is living up to that billing. A German and Russian dual national, Selin represents Germany on an international level and holds the European Junior Record in the 50 LCM free (21.83).

His converted times projected him as the Trojans’ top 50 freestyler, and he demonstrated his potential to hold that title by winning on Friday.

He’s the second-ranked freshman in the NCAA this season, behind only NC State’s David Curtiss, thanks to his 19.89 from the USC Invite two weeks ago; however, his victory in the 50 free on Saturday was his first individual collegiate win.

Parker, after placing second in the 50, won the 100 free, swimming 44.68 to Selin’s second-place 44.76. The second-generation Trojan has filed paperwork to represent another country on an international level, looking to swim for Egypt worldwide. His ability to compete with Selin presents USC with a couple of options when choosing swimmers for the sprint events.

Redshirt freshman Evangelos Makrygiannis, who represented Greece at the Tokyo Olympics, swept the backstroke events. He won the 100 at 47.99 and the 200 at 1:46.05. His relay swims, though, might have been his most impressive of the meet: He had the top split, 43.66, of the entire field in the 400 free relay, and the top split of 22.34 leading off the 200 medley relay.

The Gaucho freshmen swam in their first-ever college meet, finishing it with eight top-three finishes. DaCosta and Kyle Brill both finished with two second places. DaCosta specializes in the distance events, swimming 9:28.94 in the 1000 free and 4:37.50 in the 500. All-American Brill stayed mid-distance, swimming 1:47.54 in the 200 back and 1:49.30 in the 200 IM.

The meet also saw performances from other standout swimmers, including USC senior Victor Johansson. Johansson is just one of the 63 athletes USC sent to the Tokyo Olympics, the most out of any other university — Johansson represented Sweden.

Johansson won the 200 free with a time of 1:38.81 and the 500 free with a time of 4:29.07. Johansson had a string of medical issues in 2020, including low testosterone levels as a result of overtraining, catching COVID-19, and a bacterial infection. He bounced back in 2021, qualifying for the Olympics and placing in the top 15 in the 800 free at the European Championships.

The USC men swept both relays.

The men return to the pool Saturday to host the USC Alumni Relays meet. UCSB head to Cal Poly for a dual meet on Saturday.