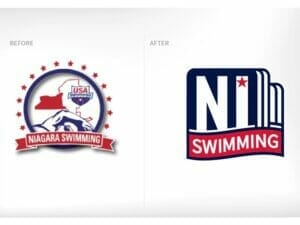 USA Swimming recently unveiled 10 logo redesigns for its Local Swimming Committees (LSCs), the beginning of a massive endeavor to redesign all 59 LSC logos.

In a news release, USA Swimming wrote that though the idea for LSC logo redesigns had long been on the minds of its creative team, the correct timing to begin such a project didn’t arrive until the onset of the COVID-19 pandemic.

“Figuring out how to tackle 59 rebranding projects was the issue,” said Matt Lupton, senior creative director, in the news release. “We attempted various panacea solutions, but ultimately decided that rebranding each LSC individually not only would maintain the visual integrity of USA Swimming, but it would also allow each LSC to emphasize its own unique aesthetic.”

Lupton and USA Swimming creative manager Natalie Elzinga officially began the project in April 2020, refining sketches and concepts to show the LSCs. Final packages include the logo in every design and size to fit LSCs’ needs, and LSCs are free to use the new logos as they please.

“USA Swimming is truly a big family of the very best and brightest,” Lupton said. “When we build one super strong brand visually, it inherently helps us all realize we’re all unified in this for the same reason – because we love this sport.

SwimSwam has ranked the ten new logos based on visual appeal, showcasing of unique geographical features, and the difference between the new and old logo.

This logo takes the cake for a number of reasons. First, that lighthouse — a quintessential landmark of Maine (though Michigan technically has the most lighthouses of any state) — fits perfectly within the name of the LSC, while still maintaining the logo’s readability. The addition of the light emanating from the lighthouse, not necessary to make the lighthouse recognizable, is a nice touch.

Second, the logo also uses the new brands’ brighter blue, which helps it stand out against LSC logos like Potomac Valley and Middle Atlantic. Third, the visual update from the previous logo to the current one makes this transformation all the more stunning.

Who doesn’t love the “WI” play on words? It was a clever touch that was missing from the old logo’s plain and unexciting design. The updated logo also subtly features a wheat design, which does a nice job emphasizing Wisconsin’s role as a heartland state for crops, though, if we’re getting in the *weeds,* Wisconsin’s top crop is corn. Giving Wisconsin its own unique logo, instead of a mildly altered USA Swimming logo, goes a long way in making this redesign feel huge.

The addition of color to the new logo goes a long way in bringing this logo into the 21st century. But the new logo goes even further in giving North Carolina swimming a logo to be proud of. While it doesn’t have a play on words or as minimalist design as the previous two (and, let’s face it, when this logo is bunched up into a thumbnail, it may be hard to pick out its nuances), the mountains in the background are classy nod to any one of North Carolina’s famous mountain ranges, including the Great Smoky Mountains, the Appalachians, and the Blue Ridge Mountains.

The star in the corner appears to be a reference to North Carolina’s flag, but the connection isn’t super clear.

The new South Carolina logo pays respect to the old design, but updates the logo to make it clearer. The “C” in the old logo could look a little unclear depending on how small the image was, but the new logo still features the crescent and palmetto from South Carolina’s flag. Also, the red adds a nice touch without being overwhelming.

Similarly to North Carolina, the new Potomac Valley logo keeps the same geographical feature while getting rid of the dated look from the old logo. The use of the Capitol helps make this logo instantly recognizable, but it’s nothing groundbreaking or particularly different, aside from a cleaner red and the transition to a more navy blue.

The sheer update of this logo keeps it in the middle of the pack, but it doesn’t have as many of the unique features as the logos ranked higher. The old logo, though it had the fun addition of a person diving into the “water,” looked seriously dated. The new design looks like it came from this decade, plus it more centrally featured the actual name of the LSC.

This logo declutters the old, featuring just the state outline while dropping the sun and water. Once uniquely fun perk of the logo is its postcard-like font for “Florida,” evoking the general sentiment that Florida is a vacation destination. Other than that, though, the logo, though cleaner, doesn’t represent as much of an update as the previous ones.

Like Wisconsin, this logo gives North Texas an image to call its own, not just a slight variation on the USA Swimming logo. Other than that, though, the new logo doesn’t particularly tell us much about the LSC.

This logo’s greatest achievement is making the brand more uniform with the rest of the LSCs by ditching the orange-red color of the previous logo. The “V,” for those not as familiar with the LSC system, could be confusing. Does it represent Vermont? (Vermont doesn’t have its own LSC). Luckily, the “Virginia Swimming” on top mostly minimizes any confusion, but the addition of the lane rope and water, though helping unify the brands and keep the LSC from looking like a UVA ad, doesn’t add a ton.

This logo, though smartly getting rid of the half-highlighted New York, doesn’t tell us much about the LSC. Does that say “NI”? Northern Illinois? What does the star represent? This logo could benefit from the spelling out of “Niagara,” but it is cleaner than the previous version.

The updated logos definitely update and unify the LSCs. How would you rank them? Let us know in the comments!