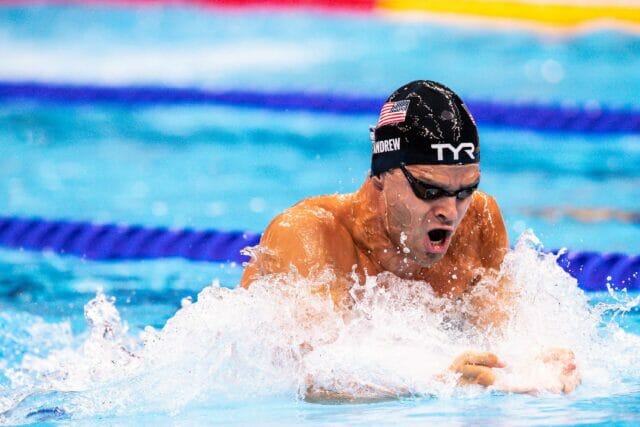 USA Swimming announced a roster of 28 swimmers that will compete at the 2021 FINA Short Course World Championships on Tuesday, with the meet scheduled for December 16-21 in Abu Dhabi, United Arab Emirates (UAE).

The roster features 15 swimmers that were on the 2020 U.S. Olympic team, including individual gold medalist Lydia Jacoby and relay gold medal winners Zach Apple, Michael Andrew and Hunter Armstrong. The team also includes seven swimmers aged 19 and under—all on the women’s side.

Relays will be chosen by the coaching staff

The team notably does not include any relay-only swimmers. Michael Andrew leads the way with six individual entries, followed by Kieran Smith, Nic Fink, Melanie Margalis and Torri Huske who all have four.

Smith and Huske represent two of the 12 swimmers on the roster currently competing in the NCAA, while there are four junior swimmers on the women’s side that are still in high school.

Margalis, who is tied with Tom Shields as the oldest member of the team at 30, is coming off a disappointing U.S. Olympic Trials in the summer and isn’t competing in the International Swimming League this season, so her presence here feels significant in signifying she’s back into full training.

There are numerous glaring absences from the U.S. roster, none bigger than Caeleb Dressel, the SCM world record holder in three events and reigning SC world champion in the men’s 100 freestyle.

Stewart had an explosive performance at the beginning of the International Swimming League (ISL) regular season in late August, breaking the world record in the men’s 100 backstroke in a time of 48.33.

Smoliga exploded for a record eight-gold medal performance at the 2018 SC Worlds in Hangzhou, China, including individual wins in the women’s 50 back and 100 back, while both King and Murphy have been among the top performers in the ISL over the past few years, largely dominating the women’s breaststroke and men’s backstroke events.

USA Swimming also announced eight swimmers that will be competing at the FINA/CNSG Marathon Swim World Series, also taking place in Abu Dhabi on December 15-16, directly before the beginning of the pool competition.

Below are the U.S. athletes competing in the open water event:

The meet was initially scheduled to run in December 2020 but was postponed for one year due to the coronavirus pandemic.