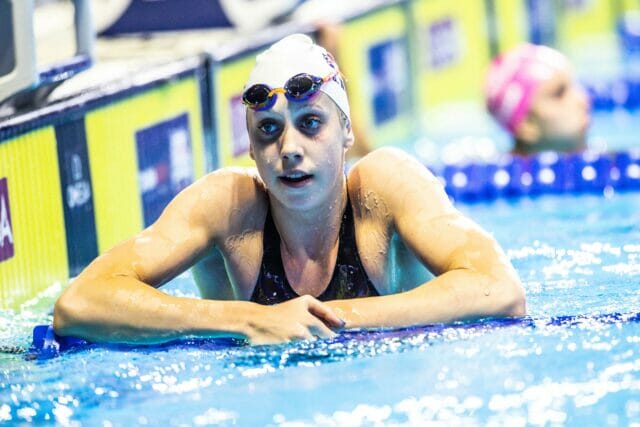 Thursday’s prelims heat sheets are here. You can also see scratches from the remainder of the meet on the live results link here, designated by SCR next to their seed time.

Walsh is a member of the USA Swimming National Team, qualifying by finishing 5th in the 50 free at the 2021 US Olympic Swimming Trials.

While most teams use their mid-season invites as a suited and rested meet, capturing NCAA Championship qualifying times along the way, the silver lining for Walsh is that because Virginia swims fast year-round, and because she already has the “A” standard in the 100 backstroke, she’s already guaranteed of her qualification to the NCAA Championships. She’s the only swimmer in the country so far who has hit the 100 backstroke “A” standard.

She swam in the team’s most recent meet, two weeks ago against Texas.

They also have the #1 time in the nation, and Automatic Qualifying Standards, in four out of five relays – they haven’t had a chance at the 800 free relay yet – so her absence shouldn’t impact relay qualifying either.

The Virginia women are the defending NCAA Champions in women’s swimming & diving. That effort last season was led in part by Gretchen’s older sister Alex, who scored 48 points and won the national championship in the 200 IM.