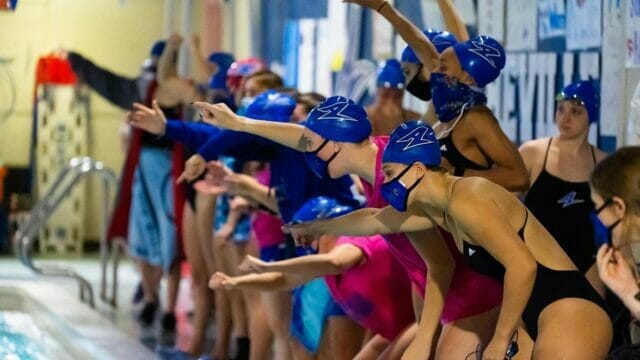 UNC Asheville vs. Campbell vs. UNC Wilmington (Women Only)

The Bulldogs of UNC Asheville continued their torrential start to the 2021-2022 season with wins over in-state rivals UNC Wilmington and Campbell University. Campbell hosted the swimming competition, while UNCW hosted the diving competition.

The victories move the team to 5-0 to open this season, and 13-1-1 in their last 15 dual meets, dating back to November 2019. Furthermore, the wins marked the program’s first-ever victories over either Campbell or UNC Wilmington.

UNCA has now beaten East Carolina, Gardner-Webb, Bellarmine, Campbell, and UNC Wilmington by an average margin of 70 points this season.

UNC Asheville won 8 out of 14 swimming events on the day, including a sprint sweep by junior Delaney Carlton. She won the 50 free in 23.66, making her the only swimmer under 24 seconds, and then after the diving break came back to win the 100 free in 52.18, by just a tenth over Campbell senior Annie Sanchez.

While that is Carleton’s slowest 100 free time of the season so far, it is her fastest 50 free swim by two tenths of a second. It also ranks her 2nd in the CCSA conference this season.

Also picking up a sweep for the Bulldogs was breaststroker Mikaela Fullerton. She won the 100 breast in 1:06.27, winning by a second-and-a-half, and the 200 breast in 2:25.72, winning by just .02 seconds ahead of UNCW’s Hannah Owings. A flip of that narrow result would have flipped the total team result too.

“We went up against some great competition today, but this is what we’ve trained for all season, and it paid off,” said Mikaela Fullerton afterward. “With the support of our teammates and our own strengths, we took first against both teams. I’m so proud to be a part of this team!”

UNC Wilmington picked up 5 victories in the meet, including a sweep of diving events. The swimming victories were all taken by freshmen, highlighting the bump in recruiting that the program has received under new head coach Bobby Guntoro, who built a reputation as the sprint coach at NC State.

Molly Braun swept the butterfly events for UNCW in 57.91 and 2:06.61. Those wins came in the absence of the team’s top butterflier, Reece Alexander, another freshman, who swam the 200 and 500 freestyles on Saturday instead.

Another UNCW newcomer Katie Knorr touched first in the 200 IM, winning in a season-best 2:08.91. That’s 1.7 seconds better than she swam in her team’s last outing 3 weeks ago against Tennessee.

UNCW also dominated the diving events. Courtney Klausen, the defending CAA Conference Diver of the Year, swept the springboard events, including a new career-best score of 301.13 on 3-meter. That made her the second Seahawk ever to clear 300 points.

While it didn’t score many points for her team, Asheville freshman Morgan Coughlen set a new school record on 3-meter with a six-dive point total of 218.25.

While Campbell fell to UNCA by a much larger margin, when scored head-to-head against UNC Wilmington, Campbell actually came away with the victory for a 1-1 split.

Their top performance came from Annie Sanchez early in the day in the 200 free, where she won in 1:53.75. That was a season best for her by nearly a full second. She’s the school record holder in the 200 free with a 1:51.02 that placed 4th at last year’s CCSA Championship meet.

One event later, Julia Sherlock won again for Campbell, topping the 100 back in a season-best of 58.11.

With the team battle still in the air, UNC Asheville finished 2nd overall in that race in 3:30.41, but got the head-to-head win over UNCW (3:30.51) to seal the meet win in come-from-behind fashion.

Campbell races next Saturday, October 30, against Gardner-Webb and Old Dominion at home; UNCW is lined up for a two-day double dual against Duke and Boston College in Durham next weekend; and asheville will host another CCSA opponent Georgia Southern next weekend.