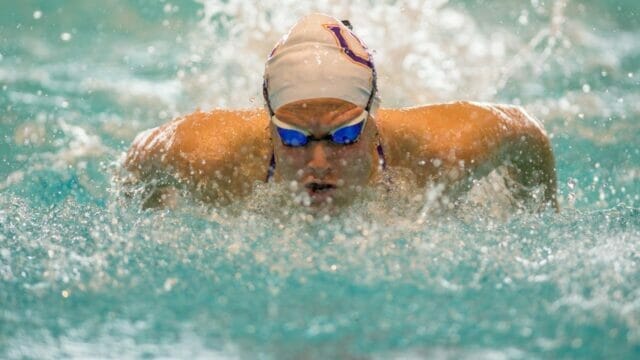 CARBONDALE, Ill. – University of Evansville freshman Sveva Brugnoli (Rome, Italy) led an attack on the UE swimming and diving record book on Thursday, as she broke a 20-year school record in the 200-yard IM as the Purple Aces wrapped up the first day of competition at the A3 Performance Invitational hosted by Southern Illinois University in Carbondale.

Brugnoli finished second in the 200 IM with a time of 2:04.39.  Her mark was over a second faster than Tomes’ school record of 2:05.72 set in 2001.  It marked the 14th UE school record broken in head coach Stuart Wilson’s three seasons at Evansville.

“Today was a great day for the team from start to finish,” said Wilson.  “From Sveva breaking the 20-year-old school record to the relays not being too far off of the records as well, it was a great day all the way around.

“As a coach, I am happy to see the team putting in a total team effort.  We are far from done though this weekend, as we still have two more days of great racing ahead of us this weekend.”

Overall, six different Purple Aces broke into the school’s career Top 10 times on the day.  Freshman Daniel Santos Lopez (Madrid, Spain) became the second-fastest male swimmer in school history in the 50-yard freestyle with a time of 20.63, while also posting the sixth-fastest time in the 100-yard backstroke with a time of 50.82 as part of UE’s 400 Medley Relay squad.

Junior Riccardo Di Domenico (Johannesburg, South Africa) also became the third-fastest UE swimmer all-time in the 50 free with a time of 20.71.  Both Santos Lopez and Di Domenico passed UE Hall of Famer Nikola Kalabic in the 50 free.  Kalabic competed in both the 1996 and 2000 Olympics for Yugoslavia while attending UE.

Junior Sarah Jahns (Lilburn, Ga./Parkview) moved into third place on UE’s career Top 10 list in the women’s 500 freestyle, as she posted a personal-best time of 4:59.31.

Freshman Marianne Mueller (Aschaffenburg, Switzerland) joined Brugnoli in UE’s career Top 10 in the 200 IM, as she posted the fifth-best time with a mark of 2:06.44.  Senior Jessie Steele (Houston, Texas/Klein) also lowered her own standard in the 50 free with a time of 23.95 to grab 10th place all by herself.

Overall, Evansville finds itself in second place as a team on both the men’s and women’s sides.  Senior diver Maggie Franz (Mundelein, Ill./Mundelein) played a key role to UE’s second place finish on the day, as she took home first place in the women’s three-meter competition, out-distancing a trio of Southern Illinois divers with a final mark of 252.53.  The mark is Franz’s best of the 2021-22 campaign to date.

“I’m very proud of how well Maggie dove today,” said UE diving coach Dustin Bredemeier.  “She was sitting in third place after prelims, but her consistency on the boards gave her the push to finish on top in the finals.”

Evansville will return to the pool on Friday, as day two of the A3 Performance Invitational hosted by SIU will begin with preliminary round races at 10 a.m., with final round competitions set for 5 p.m.