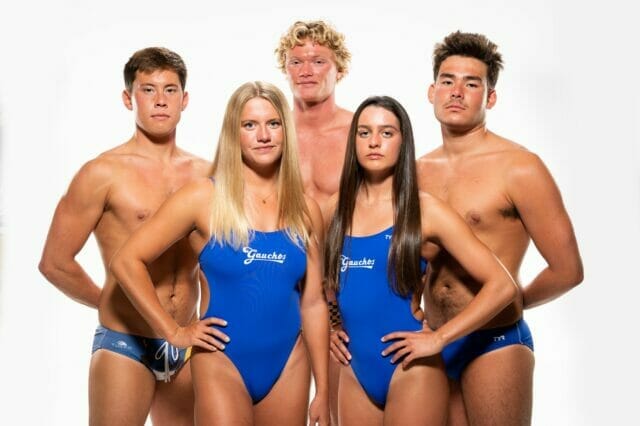 BAKERSFIELD, Calif. – Following a pandemic-shortened 2020-21 season consisting of just one dual meet and the MPSF Championships, the UC Santa Barbara men’s and women’s swim teams are ready to open their 2021-22 campaigns. The Gauchos head to Bakersfield this weekend, competing Friday in the CSUB Sprint Classic and Saturday in the CSUB Roadrunner Invite.

With new head coach Jaclyn Rosen at the helm and two classes of athletes who are preparing to experience their first full collegiate season, the team has some things to get used to. However, the Gauchos have been preparing in and out of the pool throughout the last several months and are ready to take on the new season.

“After last season, we’re just happy to get the chance to race,” said Rosen. “We’ve definitely started the year out strong with tons of memorable practices and historic sets that have been passed down through the Gaucho family. We’re excited to race teams from our conference and to have a chance to learn and get faster.”

Santa Barbara has some key returners to keep an eye on this season. On the men’s side, team captains Kian Brouwer, Tim Lee, and Dan Marella all return for their senior years. While Brouwer redshirted last season, Lee earned his first MPSF first-team selection in the 200 Free. Marella, fresh off a knee surgery, was still able to earn a first-team selection in the 500 Free.

Alec Cullen enters his senior year having broken his own UCSB and MPSF record in the 200 Breast at last years’ MPSF Championships and having participated at the US Olympic Trials. Junior Dominic Falcon, who won the MPSF Championship in the 400 IM and earned first-team honors in the 500 Free and 200 Fly last season, is another key piece returning for the Gauchos.

Maelynn Lawrence looks to continue her run of dominance, already owning three individual MPSF Championships, which includes the 200 Fly title in both her freshman and sophomore years. Reigning MPSF Freshman of the Year Danielle Carter returns for Santa Barbara having won the 100 Back and earning first-team selections in the 100 Fly and 200 Back last year.

“This season I really look forward to making memories with the seniors. They’ve had a rough go and having a great year to end their careers is the most important thing to me,” Rosen said. “I’m excited to see how everyone races, to dive into race plans and strategies, and to just enjoy swimming.”

The CSUB Sprint Classic begins on Friday at 1:00pm at the John S. Hillman Aquatic Center in Bakersfield.