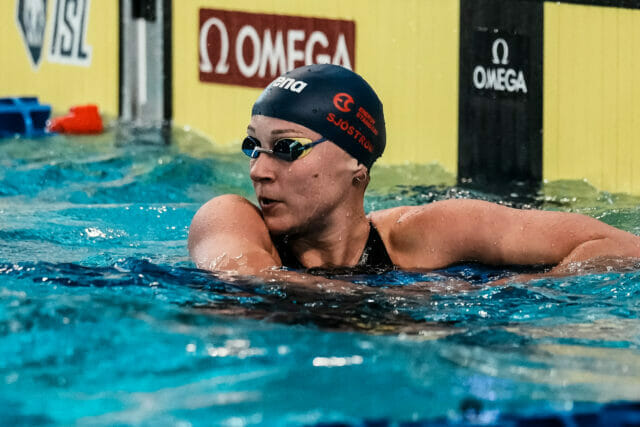 We already scoped out the top 5 men’s races to watch at the 2021 European Short Course Championships, which begin tomorrow in Kazan, Russia. But now let’s focus on the women to see what match-ups look likely.

As we review the races, it’s important to note that there are two major factors differentiating the 2019 edition of these Championships and this year’s version.

First, the nation of Great Britain has opted out entirely from this competition, which means we’ll see a new champion in both the 50m and 100m freestyle with reigning gold medalist Freya Anderson absent.

Second, Hungary’s Katinka Hosszu is not racing this year, which means we’ll also see someone new grab the gold across the 200m fly and all three of the women’s IM events.

The top seed is split between Russia’s Maria Kameneva and Belarusian Anastasiya Shkurdai, with Swedish dynamo Sarah Sjostrom also right there as the 3rd seed in this 100m IM.

These women are the only sub-58 swimmers of the bunch, with Kameneva and Shkurdai entered with marks of 57.59 to Sjostrom’s 57.74.

Kameneva earned silver behind Hosszu 2 years ago when she set the aforementioned result, a time which still stands as the Russian national record.

But, as we saw in Tokyo by way of her 50m freestyle silver, 28-year-old Sjostrom’s elbow has recovered nicely and she’s only had more time under her belt with which to gain more strength and flexibility after surgery.

With a race as rapid as the 50, anyone with a lane in the final has a chance to take home the gold. Kameneva was that woman 2 years ago, with the Russian claiming the top prize in a time of 23.56.

However, Poland’s Kasia Wasick has been red-hot over the past 18 months, culminating with a new SCM 50 free national record of 23.30 set in November 2020 followed by a new SCM 100 free Polish standard at 51.44 this past September.

Both of these outings would have rendered Wasick the gold medalist at the 2019 European Short Course Championships, so if she’s on her A-game, she may just shut out Kameneva, top-seeded Sjostrom and any other would-be contender.

The top 2 seeds in this women’s breaststroke both hail from the nation of Italy, with 16-year-old Benedetta Pilato and 24-year-old Arianna Castiglioni leading the pack.

The domestic rivals represent the only seeded swimmers with entry times under 1:04, with Pilato owning a lifetime best of 1:03.55 while Castiglioni has been as quick as 1:03.90.

Pilato has been a sensation since bursting onto the scene as a 14-year-old and has been breaking records ever since, including the World Junior Record in the LCM 50 breast at the 2019 European Championships.

In Tokyo Pilato was disqualified in the 100m breaststroke, so the teen is looking to grab some hardware here after missing the mark in her Olympic debut.

Italy’s freestyle ace Simona Quadarella took home the gold in this 800 free event, as well as the 400 free in Glasgow, but she has her hands full once again with the fields here in Kazan.

In this 800 free alone the 22-year-old Olympic bronze medalist will face a rising Russian distance freestyler in Anastasia Kirpichnikova, as well as a pair of improving-every-time-they-swim Turkish teens.

For her part, Kirpichnikova is making waves both in open water and in the pool, having competed in both disciplines at this summer’s Olympic Games. The Russian enters these Championships with a seed time of 8:11.24 sitting less than a second away from Quadarella, although she’s been as fast as 8:10.62.

17-year-old Beril Boecekler and 16-year-old Merve Tuncel of Turkey should not be overlooked, as the respective 7th and 8th seeds have been doing major damage across the mid-distance events while competing domestically. Tuncel actually set the World Junior Record in the SCM 1500 free in December of last year.

The women’s 200m freestyle podium will look entirely different here in Kazan than it appeared in Glasgow 2 years ago as none of the medalists are racing this time around.

The former podium saw the aforementioned Anderson of Great Britain take the top spot, followed by Italy’s Federica Pellegrini and Femke Heemskerk of the Netherlands.

With those big guns on the sidelines, a new champion will emerge, although there is no clear-cut favorite in the race.

Czech Republic’s Barbora Seemanova appears to be the one to beat on paper, owning a seed time of 1:53.31 to set herself apart from the pack. However, the likes of comeback kid Marrit Steenbergen of the Netherlands and 2019 European SC champion the 400m free Isabel Gose of Germany are ready to pounce.

Slovenia’s Katja Fain also made some noise across the FINA World Cup Series, including setting a new national mark in this 2free event at 1:54.25.