To Delay, or Not, NCAA Recruiting? Imperfect Solutions to an Imperfect Problem 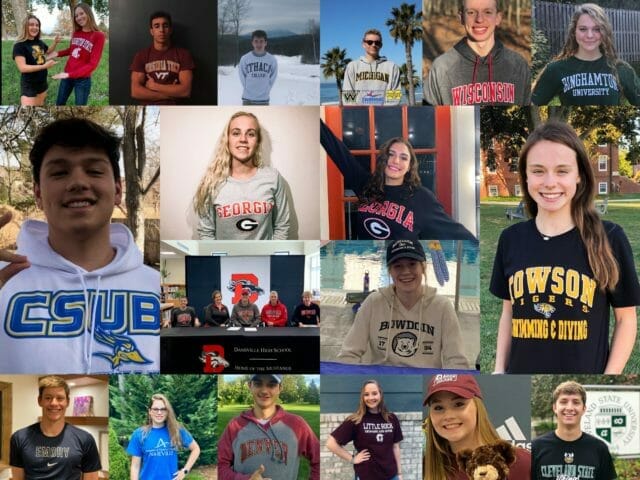 When a USOPC think tank released recommendations on changes to college swimming & diving recruiting last week, they reignited debate over what the “right’ recruiting cycle is for collegiate athletes.

In my mind, though, the debate over “right” is not a winnable one, because there is no universal system that will work for everyone.

In reality, there is approximately a trichotomy in college swimming recruiting.

There is a small top tier of athletes who will get big scholarship money, contend for NCAA titles, race in Olympic Trials finals, and perhaps make a career out of swimming.

Then there is a second layer of athletes who are invested in their college swimming, will fill out rosters at Division I programs or be top contributors at the best Division II or Division III programs, get modest scholarships, and do something else after college.

Finally, there is a third group of swimmers, who really just want to swim in college. They care where they go, but their decisions are made on somewhere between “who will have them” and “which schools are the best academic and environmental fit for them away from swimming.” This group often won’t receive scholarships at the D1 level, might get some money at a D2 or NAIA school, or could earn their way up to some ‘book money’ at a top-flight program if they progress well.

There are swimmers, of course, who straddle these groups. Some swimmers might be good enough to swim at a top-tier program, but are most concerned with getting into an academically-elite school. There are others who maybe could swim at a higher-ranked swimming program, but need to downgrade in order to chase bigger scholarships and make the financials work.

For a swimmer like a Torri Huske or a Carson Foster, for whom the choice of a college swim team could very well impact how successful they will be in their first post-collegiate career, a longer recruiting timeline with more opportunities to work with coaches could be crucial. Many of these swimmers are known quantities, even as high school sophomores, and essentially have ‘their choice’ of schools.

For other swimmers like Arie Voloschin, a big junior or senior year breakout could dramatically change the opportunities (both in terms of roster spots and scholarship offers). Those opportunities can be missed by late-bloomers if they commit too early.

Some swimmers will prefer to get their official visits — which can be a big distraction academically and athletically — out of the way as juniors, so they can focus on training and studying and standardized tests and prom as seniors. Others will prefer to focus on SATs and PSATs and buckling-down to improve their athletic and academic profiles as juniors, while delaying their decisions until senior year, where they might have a better idea of what they want to do with their life.

The problem with the current system isn’t so much that swimmers have to start talking to coaches as sophomores or juniors. It’s that the timeline allows coaches to create pressure on athletes to commit earlier, or risk losing scholarship money or roster spots, and creates pressure for athletes who see their friends commit.

And that’s without considering swimmers who are legitimately preparing for international meets — 2024 seniors, for example, who have a shot at the Olympic Team will likely want to get their trips out of the way as juniors so as to not disrupt their training.

Simply delaying the process, in my mind, doesn’t solve all of the problems created by recruiting. The time pressures of the decision-making with senior-year recruiting becomes wildly compacted.

So as I started to workshop ideas in my head, to figure out what more creative solutions could solve the problem, I tried to think of systems that would allow flexibility. Systems that would remove the “pressure” for those athletes who didn’t want the pressure, would resolve some of the chaos for coaches who are trying to manage multiple classes of recruiting at the same time, and would simultaneously alter the system of incentives and disincentives that cause stress in either an early or a late recruiting.

I’ve come up with two basic ideas that I think could work. Let’s call this an idea “workshop” for the time being — as they still ruminate in my head, and as they hopefully ruminate in yours, there will be improvements that could be made to them, or some insurmountable challenges to either. But I think they’re foundationally sound.

1. Allow communication and visits as juniors, but no offers, written or verbal, until senior year

This could, in theory, take the best parts of both systems and mash them together. Allow athletes and coaches who want to do visits and communication as high school juniors to do so. For those athletes who don’t want to begin the process until the summer before the senior year, they can do that knowing that the scholarships and roster spots haven’t all been committed, formally or informally.

If the NCAA wanted to go this route, they could ramp up the pressure to comply by adding more administrative load to coaches, requiring them to log verbal offers, or log all conversations with recruits in such a way that would indicate a willful ignorance of the rules if they’re caught falsifying data, thereby increasing the penalties.

2. Require coaches to make scholarship offers in writing, and require them to allow a minimum time period for acceptance

This sort of change, which would be a great combination with guaranteed four-year scholarships if the NCAA moves that way, would provide a mechanism for slowing the recruiting process down without requiring it. It would also eliminate one of the most universally reviled and problematic recruiting tactics: the dreaded “48-hour offer.”

This kind of system could, in theory, force a team to slow down with its offers of scholarships. If they offer a swimmer like Claire Curzan a full ride, and she has four weeks to decide whether to accept it or not, that money is locked up, or not, for four weeks. What I think we would likely see in practice is that the “big dollar” scholarship swimmers would commit early, and then the rest of the smaller scholarship swimmers would come in line behind them after teams figure out how much money they have left. That sort of happens already, but I think this would push that issue more.

There is a fairness component here that I’m not sure I like. Is it fair, in essence, to give the faster swimmers the right to first choice on college programs, while slower swimmers have to sit around and wait? Maybe not entirely. But I do think it can take a big bite out of some of the major problems.

This would put a lot of extra focus on scholarships, but as college athletics becomes more and more commercialized, maybe that’s the way it’s going anyway.

It’s quite possible that after this winter’s NCAA constitutional convention, scholarships might not even be the biggest financial driver of college decisions any more for top programs.

If Name, Image, and Likeness is kept wide open, and even more so if schools begin to pay athletes directly, the financial pressures get way more complicated. That rewrites the entire conversation and rewrites the recruiting playbook in ways that are hard to anticipate at this point. It’s plausible that “roster spots” will become a hotter commodity than “scholarships.”

As NIL becomes more prominent, athletic departments will innovate and push the edge to get a competitive advantage in recruiting. Until we know exactly what that’s going to look like, maybe the best thing to do is sit tight, move forward with the system that everyone knows well right now, and see what the future looks like.