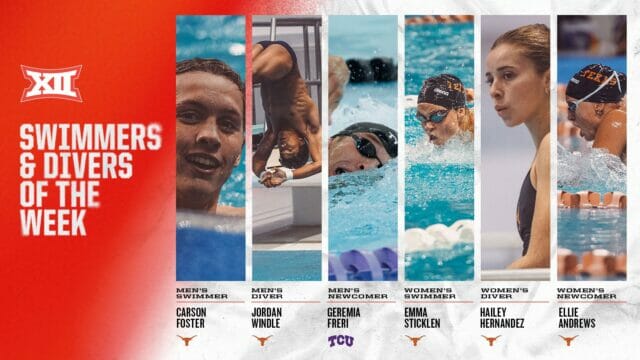 Sticklen opened up the 2021 season with two event wins and a top-five finish in the Dust Off Your Boots Invitational in Austin. Sticklen dominated the 200-yard butterfly, winning the event with a time of 1:56.24. The sophomore swam the third leg of the 200-yard medley relay to help the Longhorns win with a time of 1:39.96. She also finished fourth with a time of 50.90 in the 100-yard freestyle. This is Sticklen’s first conference honor, helping Texas secure victory against Incarnate Word 212-81.

In her opening meet as a Longhorn, Hernandez etched her name into the Texas record book setting a school-record score of 426.53 in the 3m. The freshman finished second in the 1m with a score of 321.45. This is Hernandez’s first Big 12 award.

Foster helped Texas win its first meet of the season in dominating fashion defeating Incarnate Word 194-98. The sophomore was the lone competitor to finish the 1000-yard freestyle in under nine minutes clocking in at 8:59.93. The 2021 Big 12 Men’s Swimming Newcomer of the Year also finished first in the 400-yard IM with a time of 3:46.15. This is Foster’s second Big 12 weekly award and first this season.

Windle opened his final campaign sweeping both diving events in impressive fashion. The Morrisville, N.C. native had near-perfect scores on both boards, finishing with a 449.63 in the 1m and a 486.23 in the 3m.  The four-time Big 12 Diver of the Year has now won 18 Big 12 Diver of the Week awards in his distinguished career.

Freri had a huge win for TCU at the FIU TYR Classic helping the Horned Frogs finish second overall. The Verona, Italy native won the 500-yard freestyle with a time of 4:29.19. Freri finished second in the 200-yard freestyle with a time of 1:38.58 and fifth in the 200-yard butterfly at 1:51.03. This is Freri’s second Big 12 award after he won men’s swimmer the first week of the season.