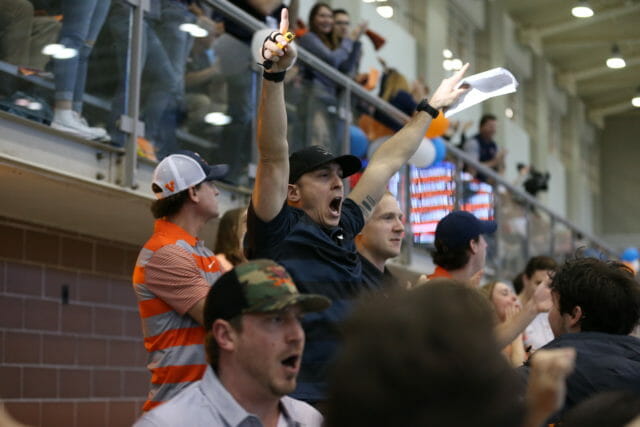 Texas got an early advantage on both sides after sweeping the diving events before the swimming events began. The UVA women managed to bridge that gap by winning 7 of the 9 events yesterday afternoon, while Texas won every single event on the men’s side.

It was a high-energy afternoon, as UVA raised their women’s NCAA championship banner and bought in a pep band to add to some flair to a dual meet. The teams responded by putting up some eye-popping unsuited swims, from Emma Weyant‘s 4:05 400 IM to Carson Foster‘s 3:40 400 IM to three women going 1:54 in the 200 fly to a pair of men splitting sub-43 in the 400 free relay. Additionally, Several AFC pool records were broken yesterday, and we should expect to see a few more today.

Walsh’s leadoff time also moves her up #1 in the nation this season, ahead of Maggie MacNeil’s 51.09 from the SMU Classic. That time would’ve put Walsh 6th in the individual 100 back at last year’s NCAA Championships.

Texas got a 52.78 backstroke leadoff by Olivia Bray, then Anna Elendt split 58.90 on breast, Kelly Pash went 52.07 on fly, and Bridget Semenuk actually just outsplit Walsh’s anchor with a 49.07. The combined time of 3:32.82 was also under the old pool record, and moves the Longhorns to #4 in the nation this season.

Again — we just saw someone go sub-42 unsuited, at a dual meet. It’s kind of impossible to track these sort of things, but that may very well be the first time that’s ever happened.

Also, it is interesting to see how different swimmers, even on the same team, are performing, relative to their best times. On both of those top two medley relays, the breaststrokers and freestylers are hitting times that are pretty close to what we’d see at championship meets, while the backstrokers and butterflyers are further away .

Both times were under the old pool record of 3:12.25, set by UVA in 2020. Those times rank as the 5th and 6th fastest time in the NCAA so far this season. Additionally, it’s worth noting that we didn’t see freshman backstroker Jack Aikins on either of UVA’s medley relays this meet.

Emma Weyant took over the lead by the 100 mark and never relinquished it, touching first in 4:46.11. That’s a season-best for Weyant by nearly a second, and moves her up to #5 in the nation this season.

After winning the first two events of the morning, UVA now leads 127-114.

David Johnston cruised to a 4:22.41 victory, giving him his second win of the meet after winning the 1000 free yesterday. That’s a slight season-best for Johnston, who went 4:22.50 against Texas A&M. The Texas men had the five fastest times of the morning, while Jack Wright had UVA’s best time at 4:30.39.

Nelson moves to #2 in the nation, behind only Kate Douglass‘ 2:07.68 from last weekend.

On paper, this looked like this may have been the Cavalier men’s best chance to get a win this meet. Noah Nichols did his utmost, and he held a narrow lead at the halfway point. But Texas’ Jake Foster parlayed a 29.66 third 50 into a 1:55.91 win, with Nichols just behind at 1:56.05.

It can be a bit tough to keep track of these sort of things when you’ve got two sisters with such crazy versatility, but remember that it was Gretchen Walsh who won the 100 back yesterday and went sub-51 leading off UVA’s medley relay earlier this morning. Bray has taken 2nd in both backstroke events this meet.

The UVA women have steadily built their lead, and the score now stands at 155-124.

Carson Foster led wire-to-wire, cruising to a 1:42.14 victory here. That time breaks the pool record of 1:42.90, set by a certain Ryan Lochte back in 2005. That time also appears to move Foster to #1 in the nation this season, displacing Nick Albiero’s 1:42.19 from the SMU Classic.

Gretchen Walsh built nearly half-a-body-length led by the halfway point, and she extended that lead on the back half to throw down a fast 48.00. That times breaks Mallory Comerford’s pool record of 48.37 from 2017, and it also shaves 0.02s off of her already-nation-leading best time.

Daniel Krueger has been firing on all cylinders this meet, and he kept rolling in this event, producing a 43.05 to win by a sizable margin. The next four men all touched fairly close together. Longhorn Drew Kibler took 2nd in 43.74, followed by UVA’s Matt Brownstead (43.82) and Matt King (43.95), then Texas’ Cameron Auchinachie (43.98).

Another pool record goes down, at Kate Douglass blasted a 51.99 to win by nearly a second. Her time broke the pool record of 52.19, set by Alex Walsh last year. Douglass owns the fastest time in the nation this season, a 51.51 from the Cal dual meet a few weeks ago. Texas got 2nd and 3rd place finishes from Emma Sticklen (52.91) and Olivia Bray (53.07).

Another close race, another Texas win. UVA’s Konnar Klinksiek built an early lead with a 21.95 on the first 50. Texas’ Alvin Jiang stormed back on the second 50, though, splitting 25.05 to Klinksiek’s 25.94, and the Longhorn got his hand on the wall first, 47.71 to 47.89. Texas has begun exhibitioning their men at this point, so UVA gets all the points for this event.

Fans were treated to another great race here. Texas’ Kelly Pash went out in 54.93 to take the lead, but UVA’s Ella Nelson split 33.82 on the breaststroke lead to take a narrow lead. Nelson hung on on for the free leg to touch out Pash, 1:57.33 to 1:57.46. Those times now rank 4th and 5th, respectively, in the nation this season.

Once again, Texas come out on top in a close race. UVA’s Sean Conway went out strong and held nearly a one-second lead at the halfway point. Texas’ Jake Foster split 29.67 on the breaststroke leg, the only man under 30, to take a 0.04s lead heading into the freestyle. Foster outsplit Conway 25.88 to 25.98 on the free leg, and got his hand on the wall first, 1:45.66 to 1:45.80 in a thrilling conclusion to the individual races.

Texas got four pretty event splits to go 1:30.08, which puts them at #6 in the nation this season.

Both sides were starting to look a bit tired after two hard days of racing. Again, another close race, but another Texas victory. Daniel Krueger led off in 19.71, followed by Caspar Corbeau (19.75), Cameron Auchinachie (19.64), and Drew Kibler (19.51), for a 1:18.61. UVA was behind nearly four-tenths of a second after the leadoff leg, and closed the gap a bit, but ultimately touched in 1:18.83.