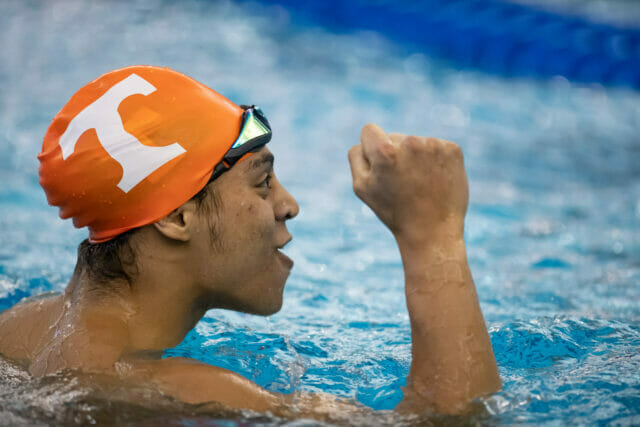 The Louisville Cardinals headed south one state to take on the Tennessee Volunteers in Knoxville yesterday. The Volunteers aptly defended their home pool, dealing defeats to the Cardinals on both the women’s and men’s sides. On the women’s side, Tennessee, who we ranked #7 in our first round of this year’s season power rankings, defeated #10 Louisville 176-197. On the men’s side, the #19 Volunteer men defeated the #4 Cardinals by a closer margin of 158-142.

The dual victories for Tennessee repeated the results the last time these two teams squared off in a dual meet, almost exactly two years ago in October 2019.

In addition to the in-the-pool action, Tennessee hung a banner honoring alum and US Olympian, Erika Brown, recognizing her for being the fastest seed heading into the cancelled 2020 NCAA Swimming & Diving Championships.

Louisville’s only win came courtesy of Arina Openysheva‘s 49.72 in the 100 free.

It was a much closer meet on the men’s side. Louisville was missing a couple key scorers in breaststroker Evgenii Somov and diver Daniel Pinto, but the Tennessee men put some together some big performances, and there’s no guarantee the ultimate outcome would’ve been any different even if Louisville had those two.

The Volunteers’ breaststroke crew come on strong, with Michael Houlie splitting 23.35 on the breaststroke leg of the medley relay and then winning the 100 breast in 52.53. Teammate Jarel Dillard took 2nd in 52.93, moving those two up to #3 and #4 in the nation so far this season, and making Tennessee and Cal the only two teams with two men under 53 yet this season.

KNOXVILLE, Tenn. — The No. 7/13 University of Louisville swimming and diving team fell to No. 17/7 Tennessee in a dual meet Thursday afternoon in Knoxville. The Louisville men fell 158-142 and the women fell 176-107.

In the 100 breast, Mariia Astashkina was the top Cardinal with a third-place time of 1:02.58 just out-touching her teammate Adeline Farrington, who put up a 1:02.88. The event was won by UT’s Mona McSherry, who went 59.77 as the only swimmer under a minute.  In the men’s race, Aidan Kreiley was the top finisher for the Cardinals when he touched fifth with a time of 57.02.

Nicolas Albiero won the 200 butterfly for the Cardinals with a 1:44.50, almost two seconds ahead of the rest of the field.  Teammate Daniel Soswas fifth with a time of 1:48.78. The Cards were second in the women’s 200 butterfly when Tristen Ulett boarded a 1:59.28 for second place. Alena Kraus was fourth with a 2:00.33.

Arina Openysheva posted the first win for the women when she turned in a 49.72 in the 100 freestyle. Christiana Regenauer was third with a 50.03 time for the Cardinals.  Murilo Sartori followed suit with the winning time of 44.42 for the men’s 100 free. Haridi Sameh was fifth with a time of 44.67 and Michael Eastman was sixth in 44.91.

The Cardinals next face Notre Dame on Nov. 5 at 5 p.m. at Ralph Wright Natatorium.

KNOXVILLE, Tenn. – Tennessee swimming & diving picked up a pair of ranked victories Thursday against Louisville, including a top-10 win by the men, at Allan Jones Intercollegiate Aquatic Center.

The 17th-ranked Vols bested No. 7 Louisville in a tight 158-142 meet, while the No. 7 Lady Vols beat the 13th-ranked Cardinals 176-107. Tennessee posted seven meet records on the day to help fuel the strong performances from both squads.

“I thought our team did a great job of carrying lessons from our NC State competition into training this week and then applying them at this meet,” director of swimming & diving Matt Kredich said. “I think I was most impressed with the way that our men have handled really high-level competition for the last two meets. We swam against two of the best teams in the country and showed a tremendous amount of fight and courage and attitude of expecting to win. That is a tough thing to do in this sport when we are ranked by times, and we know who we are competing against and know what they have been able to do.

“I’m really impressed by what our associate coaches have been able to do with the teams so far this season. I think Rich Murphy did a phenomenal job of preparing the men and their mindset going into both of these meets, so it was really nice to see that rewarded. I think Ashley Jahn has done a tremendous job shepherding a large group of strong and talented women through a couple of challenging meets. We are getting more limited opportunities to compete, but after both of these meets, I think our competitive identity is starting to become clear. I am excited about what I see.”

In a tight meet on the men’s side, the Vols used a strong effort in the breaststroke to help secure the victory. In the 100 breast, UT swept the podium by taking first, second and third. Michael Houlie had the fastest time and a meet record at 52.53, while Jarel Dillard (52.93) and Lyubomir Epitropov (54.05) followed suit. Epitropov came back later and won the 200 breast, touching the wall in 1:55.97. Dillard, the reigning SEC Male Swimmer of the Week, finished second in the event with a mark of 1:57.56.

“Today’s meet was a good foundational win for us in terms of what is to come,” Murphy said. “We took our lumps at NC State, and I think we really came out sharper today as a result. Coming out of the first event, Louisville was the NCAA champion in the 200 medley relay last year so, to get that win at the start of the meet was really significant and gave our guys a lot of confidence. Then, Rafael backed it up with a win in the 1000 free, and it gave our guys a lot of trust that we were prepared and ready to go today.

“It was a full team effort. There were outstanding swims across the board, highlighted by Houlie in the 100 breaststroke, Lyubomir in the 200 breaststroke and Kayky in the 100 fly. Those are guys that have NCAA-level experience, we rely on them for confidence and demonstration of racing effort so our younger guys can really borrow and learn from what our older guys doing. When you are competing really well, it has a contagious effect on the team and so we benefitted from that quite a bit today.”

SEC Divers of the Week Bryden Hattie and Grace Cable continued their hot start to the season, posting the top scores on both of the springboards for the third meet in a row. Hattie notched his highest mark on the 3-meter during a dual meet with a score of 401.70. He helped the Vols sweep the 1-meter behind a score of 323.10. Cable’s successful day came from marks of 292.28 on the 1-meter and 312.90 on the 3-meter.

“It was a shame that Louisville was a little depleted on the boards,” diving coach Dave Parrington said. “Bryden, especially on the 3-meter, was exceptional today. He has never gotten over 400 during a dual meet before, so that was a fantastic thing to see. At this time of year, it is really encouraging to see that high of a score. On the 1-meter, he was also really consistent. Jake and Dillon were really strong all day long. They did some really good stuff. Dillon got a good score on both boards, and Jake keeps knocking on that door.

“On the women’s side, I’m very impressed with Grace’s performance, and again was a double winner. She is getting a little better each time, which is our goal. Sometimes, the scores do not show that. We got a little bit better today because the scoring was tight. I am really happy with Maddie getting her zone-qualifying score on the 3-meter, so she is now qualified for the NCAA Zone meet which is really pleasing. The others were also solid. We need to clean up some things, but really happy with our overall performance.”

Reigning SEC Female Freshman of the Week Julia Mrozinski posted another strong showing, winning the 200 free (1:46.76) and 500 free (4:49.25). The Lady Vols dominated the 500 free, taking the top four times in the event. Kristen Stege, who won the 1000 free with a time of 9:50.43, finished second, while Aly Breslin and Kate McCarville followed behind. Jasmine Rumley brought home the win in the 50 free behind a 22.81 mark.

Mona McSharry, the reigning SEC Female Swimmer of the Week, swept the breaststroke events with meet-record performances, recording times of 59.77 in the 100 and 2:10.19 in the 200 breast. Alexis Yagerfinished second in both events with marks of 1:01.78 and 2:12.18.

“It was a really good performance from both teams today,” Jahn said. “Louisville is incredibly competitive. They have a wonderful roster, so it is always great to compete against them. You have to compete well to beat a team like Louisville, so I am really glad to be back in action with them in the fall. We really missed that last year. We did really well, and it was a great meet all around.”

Tennessee kicked off the meet with a bang in both the men’s and women’s 200 medley relays. The Vols squad of Lierz, Houlie, Mota and Scanlon won the event with a time of 1:26.78, which was a meet record. The Lady Vols lineup of Harper, McSharry, Mallory Beil and Rumley took first with a meet-record time of 1:38.78. UT also took second in the race with a time of 1:40.35 from Fuller, Tjasa Pintar, Emma Carltonand Natalie Ungaretti.

In the 400 freestyle relay, the Lady Vols notched the top time with a mark of 3:19.70 from Rumley, Brooklyn Douthwright, Mrozinski and Pintar. The men took second behind a 2:57.12 time from Crooks, Chambers, Will Jackson and Seth Thompson-Bailey.

“We have now tested ourselves in competition and that has given us a clear idea of what our next steps are” Kredich said. “We talk to the team every day about taking the next step forward; whatever that is for each person can be different. For the team, we have themes so the next phase of training for us is really about facing the things we need to do to get better and meeting them head on and then being able to apply them under the pressure of competition against Kentucky and then at the Tennessee Invitational.”

Up next, Tennessee swimming & diving will hit the road to take on SEC foe Kentucky in Lexington on Friday, November 5. The meet will begin at 2 p.m. ET. The Vols and Lady Vols will then return home for the annual Tennessee Invitational, which will feature some of the top teams in the country, on November 18-20.