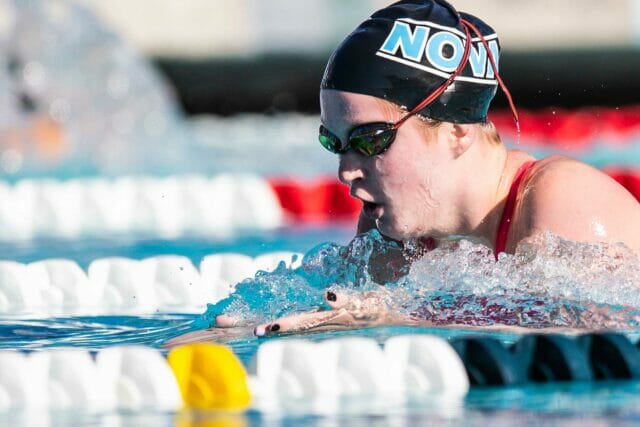 15-year old Teagan O’Dell finished her meet with two more lifetime bests and another win, while a pair of Mission Viejo teammates battled in the girls’ 100 free final on the final day of the Kevin Perry Invite.

While that was O’Dell’s only event final of the day, it wasn’t her only lifetime best: she was the top qualifier in prelims of the 100 free in 49.49 before scratching the final. That knocked about half-a-second off her previous lifetime best.

In her absence, the 100 free final came down to a battle between a pair of Mission Viejo and U.S. National Junior Team teammates Katie Crom and Justina Kozan.

Crom on Sunday announced her commitment to the University of Michigan; she was one of the top remaining uncommitted swimmers in the high school class of 2022. Kozan is headed to USC next fall.

One of the other female stars at the meet, 17-year old Macky Hodges, is also a USC commit, and she too added another win to her resume from the meet. She swam 1:56.96 in the 200 backstroke, which is a best time by about seven-tenths of a second. She swept the backstroke events after winning the 100 earlier in the meet in 54.32.

Hodges’ best events have been primarily the middle distance freestyles – she swam the 200 at the US Olympic Trials (Wave 2) in June, and is the defending CIF Southern Section Division 1 Champion in the 500 free. This week, though, she really showed an expanded versatility into the backstroke events that will serve her well as she moves into the rest of her junior and senior high school seasons and on into college in fall 2023.

The top performance on Sunday on the boys’ side came from Junior National Teamer Nick Simons, who dominated the 200 backstroke in 1:43.59. After swimming a best time two win the 100 back earlier in the meet in 47.40, he just-missed his best time of 1:42.94 in this race. He swam the event much closer to even-split (51.13/52.46) than he did when he swam his best time last December.