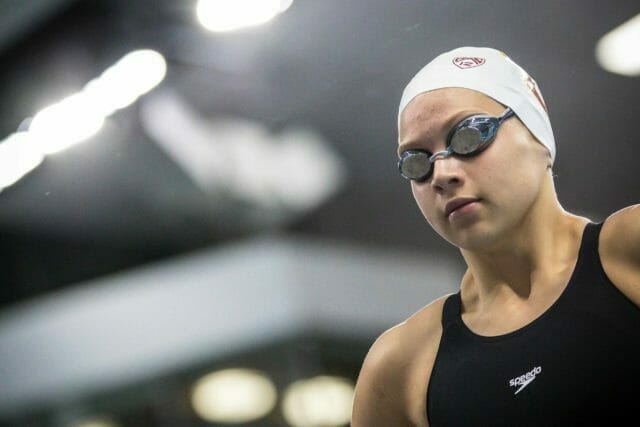 After missing the 2020-21 campaign, New Zealand native Laticia Transom has quickly reminded everyone that she’s a force to be reckoned with in the NCAA this season.

Transom, a senior with the USC Trojans, had a standout performance at the early-season USC Invitational over the weekend, sweeping the women’s 50, 100 and 200 freestyle events. The highlight came in the 200 free, where Transom dropped the nation’s top time, 1:43.98, which would’ve been among the best in the country over the entirety of last season.

At the 2021 NCAA Championships, Transom’s 1:43.98 would’ve placed fifth in the final and been less than a half-second outside of second place. With national champion Paige Madden graduating, Transom has established herself as one of the favorites to win the 2022 title come March.

For a bit of context, the fastest 200 free swim recorded prior to November 1 during the 2019-20 season was Madden’s 1:45.51, with no other swimmers sub-1:46. The last swimmer to go faster than Transom this early in the season was Louisville’s Mallory Comerford, who recorded a 1:42.79 at the 2018 SMU Classic in early October prior to winning the national title later that season.

The USC women as a whole had a very promising performance at the home invitational Oct. 15-16, with three relays hitting NCAA ‘A’ cuts and Kaitlyn Dobler (57.95 100 breast) and Calypso Sheridan (three wins, including a 1:55.76 in the 200 IM) joining Transom with some phenomenal individual performances.