Swim of the Week: Chalmers Lowers One of the Vaunted Super-Suited Freestyle WRs 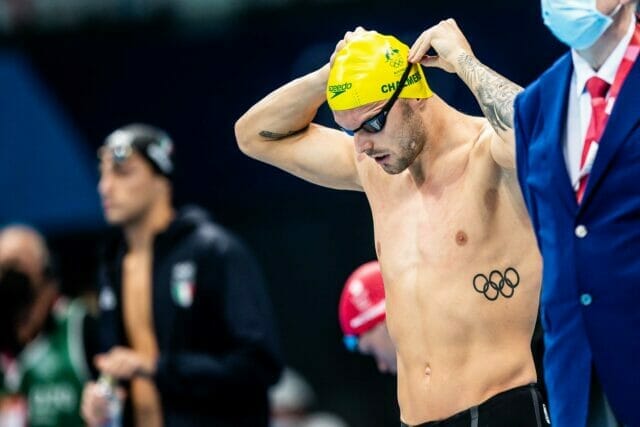 The world record set by Kyle Chalmers during the fourth and final stop of the 2021 FINA World Cup circuit in Kazan has historical significance that goes far beyond the fact that it was the fastest swim in history.

Chalmers swam to a time of 44.84 in the short-course-meter men’s 100 freestyle, downing the long-standing world record of 44.94 set by France’s Amaury Leveaux in December 2008.

There are many angles one could take while exploring the gravity of this swim.

One that stands out is the fact that, prior to the performance, there were 11 individual male world records on the books set prior to 2010 (all done in a suit that’s now banned), and eight of them came in freestyle events.

On the women’s side, only one world record—Federica Pellegrini’s LCM 200 free—was set in a super-suit, but for some reason, the men’s free records have stood the test of time much better. Prior to Chalmers’ record, eight of the 12 men’s freestyle world records on the books were set in either 2008 or 2009.

We can also look at the fact that Chalmers broke the third-oldest individual world record on the books, with Grant Hackett‘s SCM 800 free (July 2008) and Michael Phelps‘ LCM 400 IM (August 2008) the only two older than Leveaux’s 100 free.

Leveaux’s 44.94 was also a record that wasn’t seriously approached many times over the nearly 13 years that it stood.

Vladimir Morozov narrowly missed it in 2018, clocking 44.95 at the World Cup stop in Singapore, and Florent Manaudou came within a tenth in 2013.

But since the record was set, the men’s 100 freestyle has been raced a total of 13 times at either the SC World or SC European Championships, and the fastest winning time? Morozov’s 45.53 from 2019, nearly six-tenths off the record.

All of these accolades come back to how incredible Chalmers’ performance was. The record didn’t seem to be under fire, at least from Chalmers, until the week prior in Doha, when the Australian brought his PB and National Record down from 45.50 to 45.03, indicating that maybe, just maybe, the record was within reach.

And now that he’s done it, anticipation has only been heightened for the eventual showdown between Chalmers and Dressel in the International Swimming League (ISL) Final. Dressel has beaten Chalmers head-to-head at consecutive major LCM championships in the 100 free (2019 Worlds, 2021 Olympics), both razor-thin races.

Both men have always risen to the occasion, and despite being heralded as the better short course swimmer, Dressel now has his work cut out for him with Chalmers staking his claim as the fastest 100 freestyler in the world. The matchup has swim fans salivating.