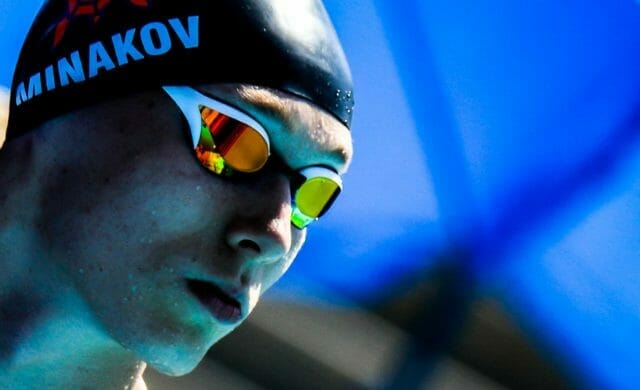 Stanford freshman Andrei Minakov, the 2019 World silver medalist in the 100 fly, made his Stanford debut on Friday in a dual meet against Utah. Archive photo via Jack Spitser/Spitser Photography

The Stanford Cardinal opened up their Pac-12 season with a pair of dominant performances over the Utah Utes in Salt Lake City.

Notably, the Stanford women have won 9 out of the 10 Pac-12 dual meet openers in the Greg Meehan era.

The Cardinal opened up the meet with a statement swim in the women’s 200 medley relay. The team used three U.S. Olympians and a former Junior National Team member.

While the time of 1:42.11 is well short of the national leaders, the relay of Regan Smith (24.47 backstroke), Brooke Forde (29.89 breaststroke), Lucie Nordmann (24.89 fly), and Torrie Huske (22.86 freestyle) shows off how good the Cardinal recruiting has been in the last two seasons.

Utah, though, was actually the faster team across the last three legs, which is a bit of a confidence booster for them as well. That includes a 22.65 anchor leg from Italian-born senior Leyre Casarin that was two-tenths better than Huske.

That group from Stanford piled up wins throughout the day. Redshirt freshman Regan Smith won the 100 back in 53.05 and the 100 fly in 54.03. Those are both event debuts for her in intercollegiate competition this season. She has swum more individual butterfly races than backstroke races this season. Smith is the World Record holder in the 200 back, and a former World Record holder in the 100 back, but her butterfly has been catching up in a hurry, including an Olympic silver medal over the summer in the 200 fly.

So far, it looks like the Cardinal intend to take advantage of her ability in both strokes.

Lucie Nordmann didn’t pick up any individual wins, but her younger sister Lillie Nordmann was on form with a win in the 200 fly (2:01.57). She didn’t swim in the team’s first meet of the season, against San Jose State, and redshirted the 2020-2021 season, although she was in Stanford training with the team, making this her first collegiate meet for the Cardinal.

While they cruised to a win, and while Utah is known as having a ‘slow’ pool, the times for Stanford’s standards were a bit off. This could indicate that the Cardinal are putting in a bigger volume of training than they have heading into previous seasons at this time of year.

Meanwhile, Utah’s win came in the 200 breaststroke, where Charity Pittard won in 2:20.63 in her first non-exhibitioned swim of the season. That win for Pittard did highlight a depth problem for Stanford in the breaststrokes, really their biggest weakness this season. Brooke Forde fills that gap a little, but in dual meets, the 200 breast and 500 free are back-to-back races, and the 500 free is also a very good swim for Forde.

Taylor Ruck of Stanford swam her first 200 free of the season, winning in 1:50.32. In 2019, as a freshman, she finished 2nd at the NCAA Championships in the event, but has sat out the last two seasons to prepare for the Olympic Games. As evidence of the above, in fall of 2019, even without Ruck, Stanford had two women go 1:47 at a mid-October meet against Arkansas.

The men’s meet was the season-opener for both teams, and while the Stanford men looked similarly beat-up to the women (in spite of separate coaching), the meet was still exciting for the Cardinal faithful: it marked the debut for the team of super-freshman Andrei Minakov.

The Russian-born Minakov, who has split training time between the US and Russia, is the defending World Championship silver medalist in the 100 fly, won both of his individual events in his first collegiate meet. But he started with a 20.61 split on Stanford’s winning 200 medley relay.

That’s already almost as fast as the butterfly leg that Stanford got from their men’s 200 medley relay at the 2021 Pac-12 Championships, where then-freshman Ethan Hu split 20.59. That Stanford relay finished 5th out of 5 scoring relays at that meet and didn’t qualify for the NCAA Championships.

Utah’s men picked up two wins late in the meet. The first came in the 100 free, where Finn O’Haimhirgin won handily in 45.32 – almost a full second better than Stanford senior Mason Gonzalez who was 2nd in 46.30.

He came back and led of the Utah free relay in a slower split of 45.92, and his teammates JP Hynes, Santi Contreras, and Lucas Calderon folllowed him en route to a 3:03.78 victory. Stanford spread their relays out, and had four relays swim 3:05-or-better, but it didn’t take an exhibition for Utah to win this one.

Of note, Gonzalez split 44.81 on a rolling start on Stanford’s D relay, the fastest split of the field and a dramatic improvement from his individual result.

Luke Maurer won both the 200 free (1:37.94) and 500 free (4:34.92). Last season, he was more focused on the sprintier freestyle races – swimming the 50, 100, and 200 freestyles at the Pac-12 Championships and throughout most of the season. But he did come out of high school with a best of 4:21.05 in the 500 free, and Stanford head coach Dan Schemmel does have a strong reputation for training distance freestylers.
Minakov isn’t the only Stanford freshman who had success in his debut. Matthew Fenlon, the #13 recruit in the class of 2021, won the first Stanford event of his career with a 1:50.70 in the 200 fly. He led a young Stanford butterfly group that were locked in a tight battle, with Preston Forst finishing 2nd in 1:51.13 and Rick Mihm finishing 3rd in 1:15.57. He also finished 2nd in the 1000 free in 9:33.65, behind veteran teammate Grant Shoults. Fenlon didn’t swim much distance through high school, and that’s the first 1000 free of his career.