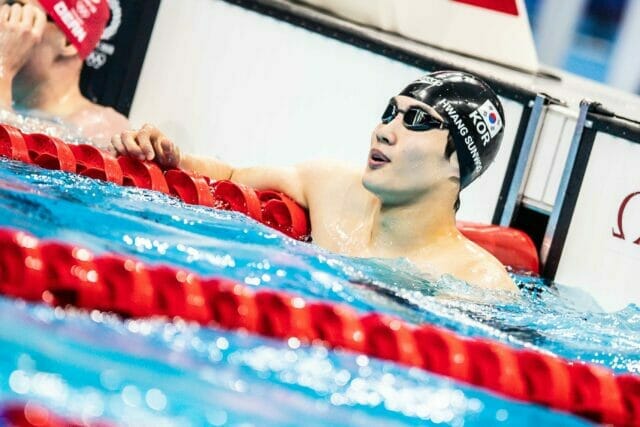 South Korean swimmer Hwang Sunwoo swam a 1:41.17 SCM 200 free to win the event at the Doha stop of the FINA World Cup circuit.

Hwang defeated world junior record holder Matt Sates to take the gold. Sates had won the 200 free at both previous World Cup stops in Budapest and Berlin. Both swimmers are 18, and Hwang’s major 200 freestyle experience is in long course, including at the Tokyo Olympics and at the Korean National Trials. He currently holds the long course world junior record in the 200 freestyle with a time of 1:44.62.

Hwang’s swim ties him with 2018 world silver medalist Danas Rapsys — who finished third on Saturday (1:42.26) — as the No. 3 performer in the world this year.

Park was a versatile swimmer in every freestyle event ranging from the 100 to the 1500. He won one Olympic gold and three Olympic silvers in the 200 and 400 freestyle over the course of his career.

Earlier this month, the teen sensation Hwang also downed Park’s long course 200 IM national record by over two seconds, going 1:58.04 at the Korean National Sports Festival. Shortly after, SwimSwam dubbed him one of the “stealthy six” teen men who could disrupt the 2024 Paris Olympics.

The final leg of the World Cup circuit will be held in Kazan, Russia, from October 28 to October 30.