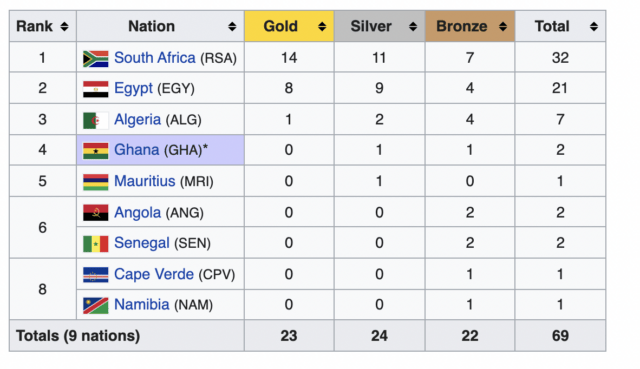 Results have finally been made available for days 2 and 3 of the CANA African Junior/Senior Swimming Championships which means we have a better picture as to where things stand in the medal table.

After day 1, South Africa led the nations of Egypt and Algeria but now nine nations in total have gotten at least one swimmer on the board in the form of a medal.

South Africa still leads the overall medal count with 32, 14 of those gold, while Egypt and Algeria are holding strong in their runner-up and 3rd place position. Host nation of Ghana is in the 4th slot while Mauritius represents the final nation in the top five just a few days into this week-long competition.

For South Africa, 19-year-old Rebecca Meder continued to make her presence known, adding the 200m free and 100m back titles to her championships resume. In the former, Meder clocked a time of 2:02.65 while in the latter she cleared the field in a result of 1:02.90.

We saw two championship records bite the dust, both on the men’s side. Mohamed Samy of Egypt did the damage in the men’s 50m back, touching in 25.34 to overtake his own championships record of 25.49 from 2018. Samy was also successful in the 100m free here, posting 50.23 for the gold.