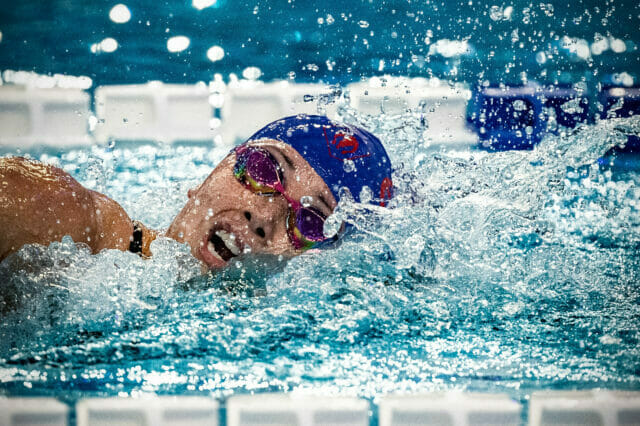 The top two finishers in the women’s 400 free both broke records on Thursday in Match #14 (Playoff #3) as part of a tight race to the wall.

The 3rd place finisher, Joanna Evans, very nearly got a national record as well. She finished in 4:00.15, which missed her own best time by just .01 seconds.

At the time, her swim was a new national record by 7 seconds.

The splits above show the impact of the new ISL reward system in the 400 meter race, which awards extra points (and money) for swimmers who are the front of the pack at the 100 meter mark (in the 400 free) or 200 meter mark (in the 400 IM). Haughey took out her first 100 meters in 56.45, which ranked her 2nd – behind only DC’s Leah Neale. Neale faded to 6th place, but avoided a Jackpot (not by much) and so scored the second-most points with 10.

The only two swimmers who had been better were, in fact, Evans and McIntosh, who swam 3:58.8 in Match #5.

Haughey broke through the barrier last week in Match #12, swimming 3:59.16 and picking up another win (she beat out Evans in that race as well).

The 15-year old McIntosh, meanwhile, an age group phenom who is living up to her hype as she moves into the senior ranks, broke her own Canadian Record that was set earlier this season.

McIntosh was aggressive in her first 100 meters too, though she only was 4th at the checkpoint, limiting her scoring. The young Canadian held that speed for longer versus Haughey, who settled into her pace sooner and came back harder on the final 100 meters.

McIntosh was a 3:58.8 in Match 4, which until Haughey’s swim on Thursday was the fastest time in the league so far this season.