Shaine Casas Returns to Training at Texas A&M with Pro Group, For Now 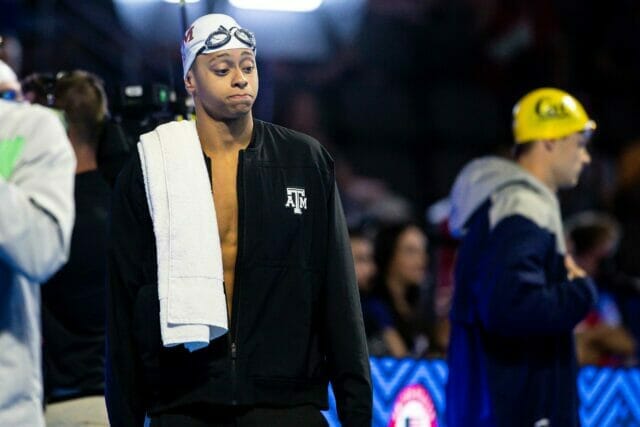 US National Team member Shaine Casas has returned to College Station and is training with the pro group at Texas A&M for the time being.

Casas entered the NCAA transfer portal just before the start of this season after three seasons at Texas A&M with the intention of transferring to the University of Texas. Ultimately, he decided to go pro instead.

“I currently am here in College Station training with the pro group until I’m able to move over to Austin to train with Coach Reese,” Casas told SwimSwam. “I am getting into great shape as I’m preparing for the SC Worlds.”

Casas says that housing and a pro contract is what’s holding him back from joining the post-grad/pro group at Texas.

“There’s a couple of things holding me back, but the two main reasons are housing and as of now, I don’t think I can train with the pro team until I’ve either signed to a company and or have gotten an agent. That’s my understanding on all of that.”

Casas made the full weight of his potential known in the summer after his freshman season at Texas A&M. There he became the #7 American of All-Time in the 100 meter back and the youngest American to ever go under 53 seconds in that race.

He followed that with an impressive run of short course swims over the next 2 years that culminated with him winning the 100 back, 200 back, and 200 IM at the 2021 NCAA Championship meet.

At the US Olympic Trials, he wound up placing 3rd in the 100 back, missing the team by about three tenths behind Hunter Armstrong, and 6th in the 200 back.

Texas A&M men’s team assistant coach Jason Calanog, who was also the childhood coach of Caeleb Dressel, leads the A&M pro group. French swimmer Beryl Gastaldello, the highest-profile member of that pro group besides Casas, announced on Thursday that she had a new coach (though she hasn’t said who). Among others in that group currently are Mexican Olympian and ISL swimmer Angel Martinez, U.S. Olympic Trials finalist Brett Pinfold, and 1:56 200 butterflier Hector Ruvalcaba.