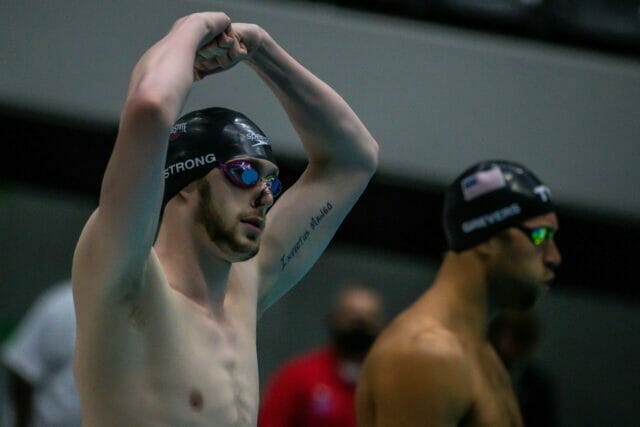 The 2021 Ohio State Scarlet vs. Gray Intrasquad meet featured a variety of unusual distance races yet showcased some fast swims nonetheless. 2020 Olympian Hunter Armstrong started the day with an 18.88 on the freestyle leg of the 200 medley relay, though Armstrong’s relay, the Gray team ‘A’ squad, placed 2nd to the Scarlet team’s ‘B’ squad which was anchored by Ruslan Gaziev in 19.41. The biggest difference between the two relays, however, came in breaststroke where Hudson McDaniel posted a 23.82 for Scarlet ‘B’ versus Gray’s Jason Matthews‘ 24.41 breaststroke split.

Armstrong, Gaziev, McDaniel, and Matthews would all go on to win individual events as well with Armstrong leading the pack at 3 individual victories. First, Armstrong won the 75 backstroke in 33.63, then the 25 yard freestyle in 8.98, and finally the 300 yard freestyle in 2:33.11, nearly 2 seconds ahead of runner-up Charlie Clark who touched in 2:34.88. Clark began the meet with a dominant victory in the 600 freestyle, putting up a 5:19.42 to win by 11 seconds. Clark ended the meet with a 2,000 yard freestyle, which he completed in 18:10.46, though the swim was considered exhibition as Clark was the only swimmer to take it on

Sophomore Katherine Zenick, representing the Gray team, started the day with a 22.90 butterfly split in 200 medley relay, nearly a full second ahead of the next-fastest in the field. Zenick went on to win the women’s 75 butterfly in 37.70, nearly a full second ahead of runner-up Catherine Russo who touched in 38.60. Zenick also won the 75 freestyle in 35.23, just 0.01 ahead of second-place finisher Amy Fulmer. Fulmer, representing the Scarlet team, won the 150 freestyle in 1:16.98, nearly a full three seconds ahead of Gray’s Allie Fenska who touched in 1:19.94.

Zenick ended the meet with a 49.05 as the lead-off leg for the Gray ‘A’ 400 freestyle relay. Zenick’s split was the second-fastest in the field and just 3-tenths off her personal best time from the 2021 Big Ten Championships. Fulmer blasted a 47.93 as the second leg of the Scarlet ‘A’ team which ultimately finished 2nd behind Zenick and the Gray ‘A’ team.

Armstrong, Gaziev, and Romano tied as the top individual scorers, each bringing in 27 points from three individual event wins each.