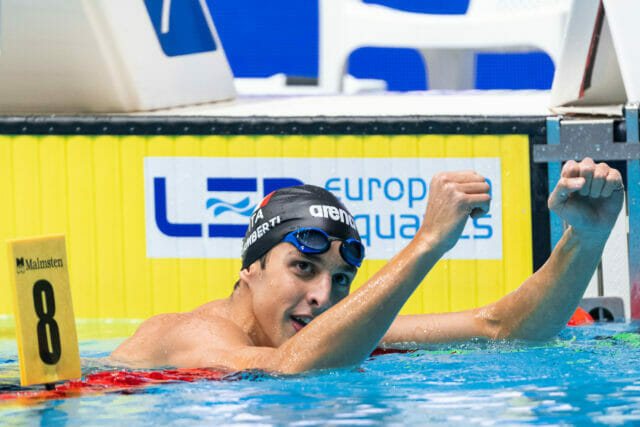 The second night of racing at the 2021 European Short Course Swimming Championships featured 11 events and no shortage of excitement. With 6 finals and 5 semi-finals, we saw the first few medals of the meet get dispensed and we found out who’s in and who’s out for the next round of racing. Throughout the session, a number of records fell including 2 Championships records, several national records, and even a world record. Check out the stories below for some of the biggest stories that came out of day 2.

Lamberti Gets Medals As Present For His 21st Birthday

Michele Lamberti started this meet firing when he posted 2 top-3 swims during the first prelims session on day 1. He qualified to swim the 50 backstroke and 100 butterfly semis, breaking an Italian record in the former, and then continued his success by making it into the final in both of those events.

During day 2 finals, which happened to take place on his 21st birthday, Lamberti didn’t disappoint and wound up earning silver to Championships record-breaker Kliment Kolesnikov with a huge swim of 22.65. The swim marked his first-ever major international medal (this is actually his first-ever major international meet), and also lowered his own national record for the third time in as many swims.

Lamberti was happy enough with that swim but found his way back to the pool just moments later for the men’s 100 butterfly final. Lamberti was in lane 7 for the race and went up against a series of tough competitors but ultimately managed to power his way to the wall for a second-place finish behind Hungary’s Szebasztian Szabo.

As if 2 silvers weren’t enough, Lamberti came back for more at the end of the session and helped his fellow Italians to gold in the 4×50 medley. He ripped a 22.62 backstroke leg to lower the Italian record for a 4th time this meet and contributed to the nation’s world record-breaking swim of 1:03.14 (more on that later).

It was Lamberti’s second medal of the day, marking an impressive opening of his major international career, and it will certainly be a birthday to remember.

In the same race that Lamberti picked up his second medal, a familiar face to the event was left off the podium. Butterfly ace and Olympic silver medalist in the 100 butterfly Kristof Milak swam a 49.88 in the final to place 4th, just 0.02 seconds slower than bronze medalist Jakub Majerski.

That swim by Milak was actually slower than the 49.68 he posted in the long course event in Tokyo but did mark a new best time for Milak in the event. Prior to this race, Milak had only swum under 50 seconds in the short course 100 fly once, a few weeks ago at the FINA World Cup in Budapest with a 49.92.

Milak, who shortly after Tokyo 2020 announced that he would be switching coaches, hasn’t raced much since the Games and has opted out of the 2021 ISL season. We’ll see what he’s up to again in 200 fly shortly as the men’s 200 butterfly is set to begin in less than 24 hours during day 3 prelims.

We’ll start here with the highest-profile record of the day which is the men’s 4×50 medley relay. Everything came together well for Italy as they took to the pool for this race, starting things off with the aforementioned Michele Lamberti who broke his 4th 50 backstroke national record in less than 48 hours to open things up.

Before the excitement of this world record-breaking effort from the Italians, two of the most reliable sprinters we know managed to knock down European Short Course Championships records in their respective events. Sarah Sjostrom started off with the 50 freestyle by notching a 23.12 for gold, improving upon the 23.30 CR that she set back in 2017. The swim was only a little bit slower than her 23.00 Swedish record, as well as the 22.93 world record of Ranomi Kromowidjojo.

As previously discussed, Kliment Kolesnikov did the same thing as Sjostrom in the men’s 50 backstroke by hitting a 22.47 50 back to lower his own meet record. Kolesnikov’s mark was a bit newer than Sjostrom’s as he had set it on day 1 of this meet at a 22.57 (which was also a new Russian record by 0.01).

The fourth Championships record of the day came in the men’s 100 breast semi-final when Ilya Shymanovich posted a 55.45 to lead the pack, downing his own mark from 2019 of 55.89. Shymanovich is the world record holder in the event with his 55.34 from last year and has one more shot to crack that mark during day 3’s final.

Contrary to the records and the gold medals we’ve discussed thus far, the day 2 finals sessions also featured a couple events in which big stars were eliminated for further contention. There were 5 semi-finals on day 2 of the meet, in which the respective top 8 finishers earned a spot in the final, while the bottom 8 were dropped.

While there weren’t many upsets in the men’s 50 free or women’s 200 fly semis, the brutal field in the men’s 100 breast took out 2 notable men including Marco Koch of Germany, and Anton McKee of Iceland. Koch and McKee were seeded 8th and 4th, respectively heading into the prelims but wound up finishing 15th and 16th in the event. McKee posted a 58.23 during the semi-final, farr off from the 56.30 he went in with, while Koch went from an entry time of 57.11 to a 58.09.

On the women’s side, the 200 backstroke featured an even bigger upset when Ingeborg Loeyning was met with the end of her SC Euros run in the event. Loeyning was entered in the event with a 2:03.67, which was good enough for the third seed. She looked solid in the prelims with a 2:06.22 for 2nd place behind Kira Toussaint (2:06.17) but then didn’t kick it int0 the next gear for round 2.

Loeyning was actually slower during semis, posting a 2:06.71 for 9th overall, which will make her first alternate for the final on day 3.

Stay tuned for more coverage of the 2021 European Short Course Championships as we get into day 3 of racing on Thursday, November 4.