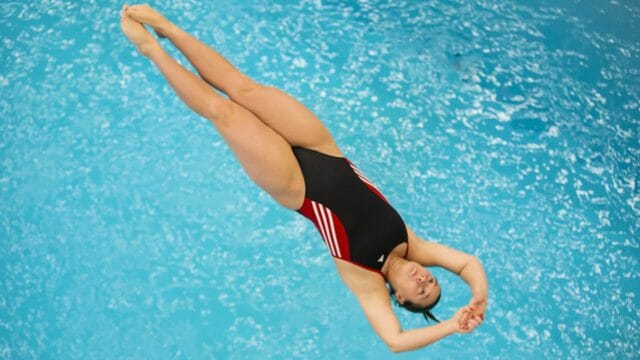 By Michael Hamann on SwimSwam

The University of Nebraska Cornhuskers travelled north to Ames to take on former Big 12 rival Iowa State and came away victorious, 186 to 114.

The meet started off with a thrilling 200 medley relay with Iowa State outtouching Nebraska by slimmest of margins, 1:44.75 to 1:44.76. The race was tight the entire way with no team leading by more than 5 hundredths at any of the exchanges. Iowa State junior Maddie Ziegert held off Nebraska junior Emily Haimes at the touch, 23.87 to 23.84.

Leading the way individually for Nebraska was All American Autumn Haebig, who won both the 100 back and 100 free. The Grafton, Wisconsin native went away from her normal event lineup to narrowly win the 100 back, touching over teammate Madesyn Ronquillio 55.75 to 56.18. Haebig returned to win the 100, again narrowly outtouching a teammate 52.10 to 52.18 for the win. This time, Alexa Kucera, a sophomore from Hutchinson, Minnesota was the runner-up. Haebig earned her first All American honors last season after finishing in 9th in the 200 and 14th in the 500 free.

Also winning two individual events for the Cornhuskers was sophomore Ella Stein, who swept both breaststroke races. A native of Hudson, Wisconsin, Stein started her day with the 100 breast, using a quick opening 50 to take the win in 1:04.12. Later on, Stein returned to win the 200 breast as well, with a time of 2:21.55. Both of those times were season bests for Stein, whose previous season bests stood at 1:04.91 and 2:22.79, respectively.

The Nebraska diving program also impressed on the day, with senior Sara Troyer breaking the 3 meter pool record. Troyer, an All American who qualified for NCAAs in 2020, scored 343.20, breaking the pool record of 340.73 set by Iowa State’s Kendra MeInychuk in 2008. Troyer also returned later in the meet to win the 1 meter as well with a score of 280.40.

Nebraska returns to the pool again on Friday when they welcome the Kansas Jayhawks to Lincoln, while Iowa State will host Nebraska-Omaha in Ames on Friday.