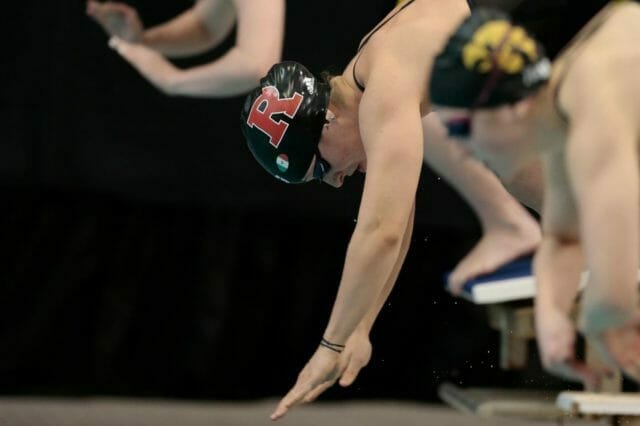 Rutgers’ weekend trip to the Hoosier state ended with a 179 to 115 win on Saturday over IUPUI in Indianapolis, one day after taking a loss to Big 10 rival Purdue on Friday.

The Scarlet Knights were led by a trio of dual event winners. Tina Celik, a freshman from Slovenia, swept the breaststroke races. She opened her day as Rutgers’ lone entrant in the 100 breast and used a strong opening 50 to take a commanding win with a 1:06.18. Later on, Celik returned to narrowly win the 200 breast over teammate Sofia Chichaikina, 2:24.07 to 2:24.46. Both of those swims were slower than she had posted the day before at Purdue, where she swam 1:05.19 and 2:23.24 in the 100 and 200, respectfully.

Fellow international freshman, Alice Scarabelli, also won two individual events on the day. Scarabelli, a native of Milan, Italy, started her meet by winning the 200 free, outtouching Sofia Chichaikina 1:50.20 to 1:50.25. Scarabelli then later returned to dominate the 100 free by almost two full seconds, touching first in 51.40, nearly two full seconds ahead of IUPUI freshman Lilly Brandt. The 23 year-old Scarabelli projects to be a high-impact addition to the Rutgers roster this season as she has competed for the Italian national team at the European Junior Championships and World University Games.

Rutgers’ final dual winter was Beatriz Zoppei dos Santos, a junior from Brazil. Zoppei dos Santos swept the butterfly events, handily winning the 200 fly in 2:06.67 and returning later to win the 100 fly in 56.58. Both times were a bit slower than the day before in West Lafayette, where she posted 2:04.33 and 55.80.

Rutgers returns to action this Friday when they welcome Ivy League foe Harvard to New Jersey. IUPUI will take a break from competition until hosting the House of Champions Invite November 18-20.