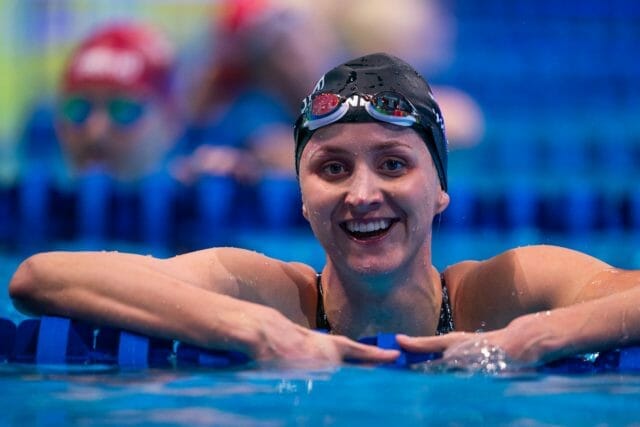 Both Nasretdinova and Kameneva were members of both of the two relay teams, but Kameneva swam faster in 2021 than she did in 2017, whereas Nasretdinova swam slightly slower. Surkova has been a strong sprint freestyler over the past year, placing fifth in the 50 at the 2021 European Short Course Championships with a time of 24.15. She was also part of the winning 4×50 free relay at the Russian National Championships in 2019. Klepikova is better known as a butterflier, taking second in the 100 fly at the 2021 European Junior Championships, but she still posted the second-fastest time of the relay.

The Polish team finished third at the 2021 European Short Course Championships with a time of 1:35.94. Here are the team’s splits:

The team beat the national record previously set at the 2013 European Short Course Championships with a time of 1:38.78. That team consisted of Aleksandra Urbańczyk, Alicja Tchorz, Dominika Sztandera, and Anna Dowgiert.

Last year, Wasick was nominated for Poland’s Athlete of the Year. She ended season 2 as the fastest 50 freestyler in the International Swimming League. She also broke her own 100 free national record earlier in the year.

Both Tchorz and Sztandera stuck around the sport long enough to see another team break their record — another team that they also happened to be a part of. Earlier this year, Tchorz broke the 100 fly national record, but her free is still fast enough to land her on the relay team. In 2020, Sztandera set a personal best in the 50 free with a time of 24.95 at the Polish National Championships, and she beat that time off a relay start here. Fiedkiewicz also topped her best 50 free time (24.34) off the flying start.

You can see the rest of the results from Day One of the European Short Course Championships here.