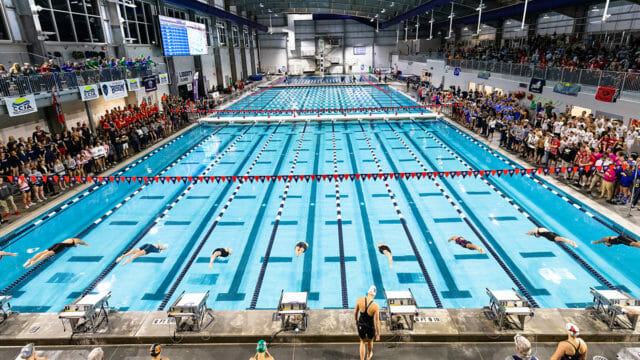 The schools reportedly likely to join the conference, which has been gutted recently, are Liberty, New Mexico State, Jacksonville State and Sam Houston State. Current photo via Liberty Athletics

Conference USA, which is set to lose up to 11 of 14 schools as the college football landscape undergoes a major realignment over the next few years, is reportedly likely to add four new schools.

Those schools are Liberty, New Mexico State, Jacksonville State and Sam Houston State, according to The Action Network.

The schools leaving Conference USA include Florida Atlantic, Charlotte, North Texas, UTSA, Rice, UAB, Marshall, ODU, Southern Miss, and likely, Middle Tennessee and Western Kentucky. The final two are reportedly heading to the MAC, but the move is not final.

Liberty is the most significant move in terms of both football and swimming ramifications. The school competes as an independent in football, but has recently ranked in the AP Top 25 — as high as 17th last season — and secured a bowl game in three straight seasons. In swimming, Liberty and FGCU have a strong rivalry in the Coastal Collegiate Sports Association, tying for first at the 2021 conference championships.

Assuming the moves are approved, nothing would change in the immediate future. Most of the realignment moves throughout college sports are slated to take place over the next few years, but all by the start of the 2025 school year. As noted by The Action Network, since Texas and Oklahoma announced their bombshell exit from the Big 12 to SEC, 22 schools in total have announced moves.