Pilato, Sabbioni Among Big Names Eliminated In Heats On Day 1 of SC Euros 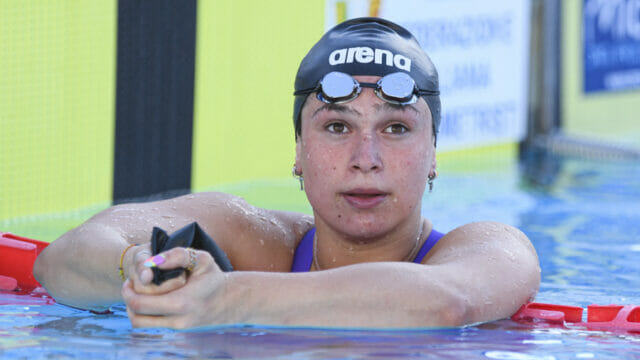 World record holder Benedetta Pilato was among the major names that failed to advance out of the preliminaries during the opening session of the 2021 European Short Course Championships in Kazan, with the two-per-country rule making an early impact.

Several of her Italian teammates–Simone Sabbioni, Matteo Rivolta and Francesca Fangio, to name a few–found themselves in the same boat.

Unlike at the FINA World Championships, countries are allowed to enter more than two swimmers in an event at the European Championships, but only the top two from each nation can advance beyond the heats.

So as a result, Fangio put up the third-fastest time of the morning in the women’s 100 breaststroke in 1:04.86, and Pilato was sixth overall in 1:05.23. But due to the fact that Arianna Castiglioni (1:04.40) and Martina Carraro (1:04.44) were the two fastest swimmers in the prelims, both Fangio and Pilato find themselves on the outside looking in.

In the men’s 50 back, Sabbioni was seventh-fastest in 23.50, and Rivolta was ninth in 23.55. Neither will advance after Italian countrymen Michele Lamberti (22.91) and Lorenzo Mora (23.01) qualified second and third, with Lamberti setting a new National Record in the process.

Some notable names eliminated in the 400-meter events, not due to the country rule, included Aleksandr Egorov, Filippo Megli, Jordan Pothain and David Popovici in the men’s 400 free, and Viktoria Mihalyvari and Anastasiia Sorokina in the women’s 400 IM.

Read the full story on SwimSwam: Pilato, Sabbioni Among Big Names Eliminated In Heats On Day 1 of SC Euros