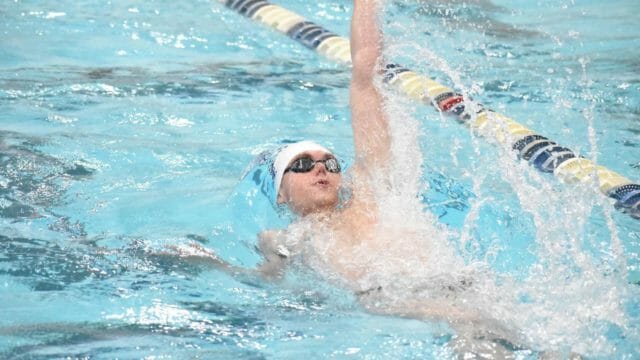 Villanova vs. University of Pennsylvania

For the fifth time in the last six seasons, the Penn men and women defeated Villanova on Wednesday.

Matt Fallon, a member of the National Team and a freshman at Penn, swam off-events at this meet. He finished second in the 200 free with a time of 1:43.28, behind Penn’s Zach Althoff. He also swam in the 400 IM, and though his race was exhibitioned, his time of 3:55.25 was the fastest.

Sophomore Ben Feldman and junior Neil Simpson both won two individual events for Penn. Feldman won the 50 free (21.34) and 100 fly (50.86). This is his first dual meet of college, given that last season was canceled for the Ivy League due to COVID-19. In high school, he was a NISCA All-American and a two-time USA Swimming Scholastic All-American. He also won the Connecticut state title twice in the 100 fly.

Simpson swept the breaststroke events, swimming the 100 in 57.85 and the 200 in 2:07.85. In the 2019-20 season, he placed tenth in the 100 breast and thirteenth in the 200 breast at the Ivy League championships. That season, he also won the 200 breast against Villanova, and this year his time at this meet is the fifth-fastest in the League so far.

Senior Jack Loveless won the 1000 free in 9:41.00. His best time in the event is 9:37.32, so he’s not too far off his best time in his first race of the season. This time also makes him the eighth-fastest swimmer in the League currently.

Villanova also won a few other individual events. Freshman Aubrey Bowles won the 200 back in 1:51.96. This is his fastest time of the season. He previously swam the event in 1:52.26 against NJIT.

Noah Chipman won the 3-meter diving event for Villanova, with a score of 270.53.

Penn exhibitioned the 400 IM and 400 free relay, allowing Villanova to win those events, too.

This is Thomas’ second meet for the Penn women after spending three seasons competing for the Penn men’s team.

Teammates Vanessa Chong and Hannah Kannan both won two individual events each. Chong swept the fly events, swimming the 100 in 55.08 and the 200 in 2:00.66. This is her freshman season, and she’s already won events in both of Penn’s meets.

Montesi won the 400 IM in 4:25.05. Even though Penn exhibitioned their swimmers, Montesi still swam the best time. Last season and the season before, she won this event at Big East Championships, so her top performance comes as no surprise.

Penn returns Saturday against Brown, and Villanova will compete Nov. 18 at the WVU Invite.