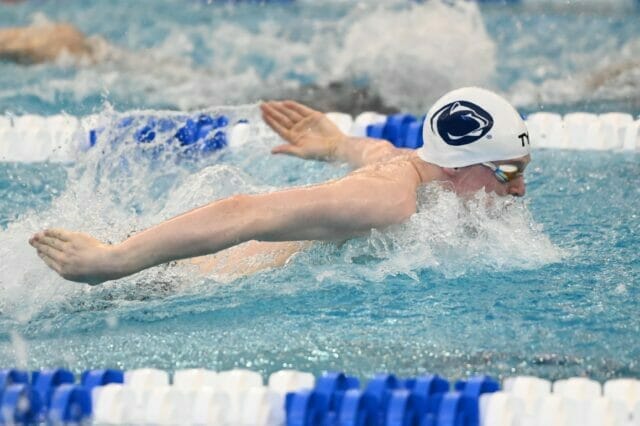 The Penn State Men’s and Women’s Swimming and Diving teams swept their meets against West Virginia (0-1 men, 2-1 women) this weekend, with both programs improving to 2-0 on the season.

On the women’s side, Penn State was led by seniors Madison Murtagh and Marie Schobel, who each won two individual events during the meet.

Murtagh swept the mid distance freestyle events. She first won the 200 freestyle in a time of 1:51.84, coming in over a second ahead of the field. Later, Murtagh touched first in the 500 freestyle with a time of 4:57.12, making herself the only swimmer under the 5:00 barrier.

Schobel picked up two wins of her own in the backstroke events. First, in the 100 backstroke, Schobel touched first in a time of 55.09, leading a 1-2-3 finish for Penn State with teammates Emma Harvey and Molly Carlson. The trio also took the top three spots in the 200 backstroke, with Schobel leading the pack in a time of 2:00.32.

Schobel also picked up a victory as a member of Penn State’s 400 medley relay, splitting 54.74. She combined with teammates Maddie Cooke, Maura Fleuhr, and Catherine Stanford to finish in a time of 3:44.19, over 5 seconds ahead of the runners up.

In the women’s 100 breaststroke, Penn State’s Liv Jack touched first in an impressive time of 1:04.63, coming in nearly 2 seconds ahead of the field.

On the diving boards, West Virginia saw Sarah Krusinski post a score of 269.85 to claim the women’s 1m event, while Penn State’s Sierra Shurts narrowly won the 3m event ahead of teammate Tatum Evans with scores of 265.93 and 258.98, respectively.

Penn State’s 400 medley relay also dominated the event, touching nearly 3 seconds ahead of the field. The team of Michael Daly, Daniel Raisanen, Victor Baganha, and Will Roberson combined for a time of 3:16.72 for the victory.

West Virginia got an individual victory in the 200 IM, where David Dixon posted a time of 1:52.69 to claim victory ahead of the field by over a second.