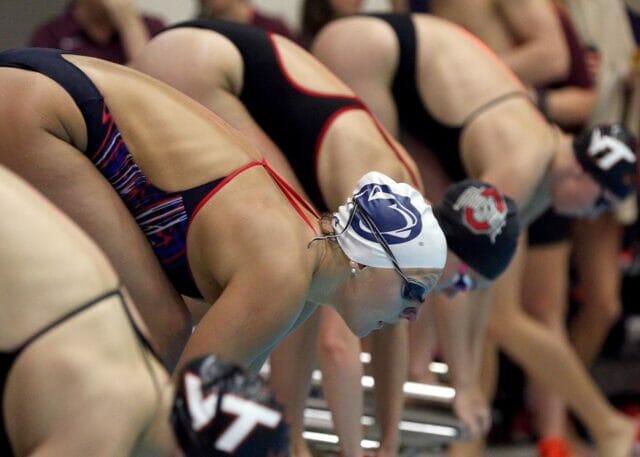 Over the Halloween weekend, Liberty University played host to Penn State and a small ECU team for a two-day meet on their campus. Events that were contested include the 100 medley relay and 50’s of strokes, as well as more traditional races. The meet was women-only as two of the three teams only sponsor a women’s swimming and diving program.

In the first of the unorthodox events for the day, Penn State came away with the top time in the 100 medley relay. The team of Marie Schobel, Maddie Cooke, Emma Harvey, and Catherine Stanford combined to stop the clock in 46.00.

The Nittany Lions continued their momentum into the 200 free, with Abigail Amdor running away with the win by nearly two seconds over Liberty’s Eva Suggs. Amdor finished the race in 1:50.61. She also claimed first in the 100 free later in the meet, finishing in 50.91. While Amdor took the 100 and 200 freestyles, her teammate Catherine Stanford claimed the 25 and 50 free. in the 25 she finished in 10.87, while the 50 saw her stop the clock at 23.23.

Liv Jack came away with the fastest time in the 100 breast, edging out teammate Maddie Cooke with a time of 1:03.79.

Also claiming an event win on the weekend was Morgan Rinn in the 200 fly. The Nittany Lion sophomore finished in 2:02.78.

The 200 IM came down to a close race between Abby Henderson of Penn State and Chloe Harris of Liberty. Henderson ended up coming away with the win, finishing in 2:06.42 to Harris’ 2:06.72.

Penn State was also dominant in the more traditional relays during the meet, winning both the 200 medley and 200 free. In the 200 medley, Marie Schobel, Maddie Cooke, Emma Harvey, and Catherine Stanford combined to stop the clock in 1:42.51. Stanford and Cooke then joined up with Ambor and Marly Lough later in the meet to take the 200 free relay in 1:34.23.

Penn State’s lone defeat of the meet came in the 200 breast, with ECU’s Caitlin Reynera taking the top spot and Liberty’s Genna Joyce coming in second. Reynera finished in a time of 2:19.63, while Joyce touched in 2:19.73.

After helping out both of Penn State’s medley relays earlier in the meet, Emma Harvey picked up an individual win in the 50 fly. The junior cruised to the win by a wide margin, touching in 25.08. Another member of multiple Penn State relays, Maddie Cooke, picked up a win in the next event, the 100 IM. Cooke, who was a multiple event finalist at the 2021 Big-10 Swimming and Diving Championships, finishing in 57.63. She also finished with the top time in the 50 breast (28.99).

Nittany Lion freshman Maura Fluehr picked up the win in the 100 fly over Emma Harvey, the winner of the 50 fly. Fluehr finished in 56.40, while Harvey was just behind in 56.44.