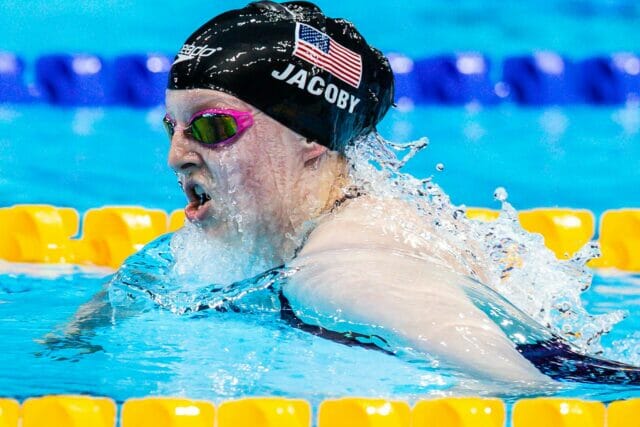 A clearly-unrested Jacoby won the 100 yard breaststroke in 59.66 and the 200 yard IM in 2:05.70. Her time in the 100 breaststroke is a new Alaska State Record, and she now has the six best times in State Championship meet history. Her 200 IM swim makes her the second-fastest swimmer in state meet history, behind record holder Tahna Lindquist.

After last year’s official ASAA state championship meet was canceled, Jacoby finishes her career with 5 individual state titles in 6 swims. The only blemish came as a sophomore in 2019, where she placed 3rd in the 200 IM.

She was one of four swimmers from her high school to compete at the meet, and one of only two to make the finals. Along with Mia Nappi, who was 6th in the 100 fly and 7th in the 100 breast, Seward’s girls finished in 9th place at the meet.

But even an Olympic gold medalist wasn’t enough to hold off the Dimond High School girls, who won their 6th-straight girls’ state title.

Jacoby wasn’t the only Olympian competing in Saturday’s girls’ meet: Jillian Crooks, who was a flag-bearer for the Cayman Islands in Tokyo, won big in her first Alaska State Championship meet.

The 15-year old Crooks was Cayman Islands’ youngest-ever Olympian over the summer, and now the Homer High School freshman is making her mark on the state history books as well.

She also split 23.37 on the leadoff leg of Homer High School’s 200 free relay. Her teammate Carly Nelson was 3rd in the individual free in 53.05 as part of a fast 1-2 sprint punch for Homer.

The defending state champion in that 100 free, Dimond’s Dreamer Kowatch, opted to swim the 200 free (2nd) and 100 fly (4th) this season instead.

Eagle River’s Anna Keen won the 50 free in 23.61. That sliced .04 seconds off her time from her conference meet a week earlier. The 14-year old also swam a best time of 1:04.70 in the 100 breaststroke for 4th place in her freshman championship meet.
Hutchison High School junior Grace Greene won the girls’ 1-meter diving with a score of 373.10. She was 4th at the last state championship meet in 2019.
Lathrop sophomore Avery Hafele won a pair of races in her first high school state championship. First she topped the 100 fly in 55.70, and later she won the 100 back in 58.04. Both swims are new lifetime bests, and the 100 fly missed another Meghan Cavanaugh State Record by just .11 seconds.
West Valley High got their lone win of the meet in the 500 free, where junior Samantha Bristor won wire-to-wire in 5:12.35.

Kodiak opened their title run with a 1:35.67 in the 200 medley that is the second-best time in state history. That relay included a 23.48 backstroke leg from Ian Rocheleau and a 23.63 fly leg from Jackson Krug, both of which were foreshadowing of victories to come.

Later in the meet, Rocheleau won the 100 back in 51.16, more than two seconds faster than runner-up Wesley Mank, a freshman from Craig High School.

The meet was still mathematically within reach for Dimond High headed into the final relay just 6 points behind Kodiak, but Kodiak and Juneau tied for the win in 1:15.32, with Dimond 3rd, clinching the state title for the Bears. A Krug 45.73 anchor ran down Juneau Douglas’ Tytan Fawley in that race to share gold.

The other relay, the 200 free relay, was won by Eagle River High in 1:27.92. Dimond River was 2nd there, about three-tenths back, and Kodiak High was about 6th. That was Dimond’s best opportunity in the meet to make up serious points on a Kodiak High team that didn’t quite have three relay depth, but ultimately they couldn’t do enough.

The lone individual double winner of the day was Thunder Mountain’s Patrick Foy. Just a sophomore, racing in his first high school state championship, Foy won the 200 IM in 1:50.55. That put him a whopping four seconds ahead of one of the other stars of the meet, Rocheleau, and left him half-a-second short of the state record. His best time coming into the meet was a 1:53.7 from Sectionals in April. This event is a new revelation for him – prior to December 2020, his best was just a 2:22.90, then he went 2:15 in December, 1:58 in February, and has dropped his time regularly since then leading into his victory on Saturday.

His swim crushed the old state record of 56.40 that was set by Sodoltna’s Joshua Gemmell in 2000. That was the oldest boys state record on the books by eight years.

Juneau Douglas’ Tytan Frawley won the boys’ 200 free in 1:43.42, ahead of Krug. He later finished 2nd in the 500 free in 4:45.36.
Service High freshman Conrad Fawcett won the 500 free in 4:41.59. Service High, the defending champions, graduated a veteran group from their title-winning 2019 team, but Fawcett is the head of a young rebuilding program.
Dimond High’s Andrew Billings topped the 50 free in 21.55. This meet marked the first time that the uncommitted junior broke 22 seconds in the race. Prior to this fall season, his best time was a 23.03 at the 2019 state championship when he was a freshman.
Juneau Douglas junior Chaz VanSlyke won the 100 fly in 52.17, which is a new personal best for him.
Wasilla High School’s entire representation at the state meet was via its divers, and they scored big. On the girls’ side, they were led by a 3rd-place finish from Audrey Dietz that saw them pick up 3rd and 8th place points. The boys had four of the top six finishers, led by Kade Reynolds with a whopping 508.25. Wasilla is the historic state power in diving – Reynolds’ win is the 7th diving state title by the program since 2014. The diving program is a co-op led by Wendi DiGerlando, who also coaches Colony High’s diving team – which had a female and male state finalist as well.