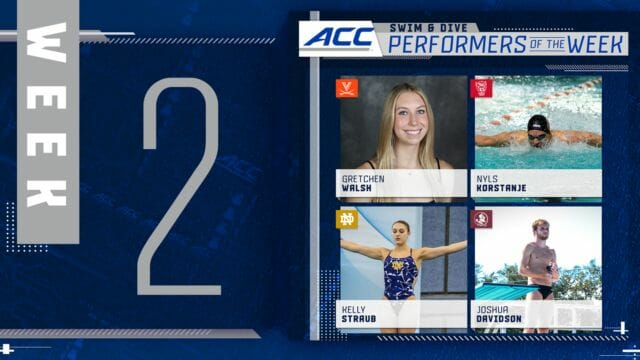 A freshman from Nashville, Tennessee, Walsh helped the reigning national champion Cavaliers to a 141-121 win over No. 4 Cal. The rookie swimmer won all four of her events and posted NCAA provisional times in the 100 free (48.02) and 100 backstroke (51.15). Walsh was also part of the 200 free and 200 medley relay times that clocked NCAA automatic times at the meet. Gretchen Walsh teamed up with Alexis Wenger, her sister Alex Walsh and Kate Douglass in the 200 medley relay for a time of 1:34.65. The 200 free relay team of Gretchen Walsh, Alex Walsh, Lexi Cuomo and Douglass recorded a time of 1:27.82.

Hailing from Tomball, Texas, Davidson helped Florida State defeat Auburn, 153-147. The Seminole diver swept the springboard events, scoring a 355.05 in the 1-meter event and a 371.07 in the 3-meter competition.