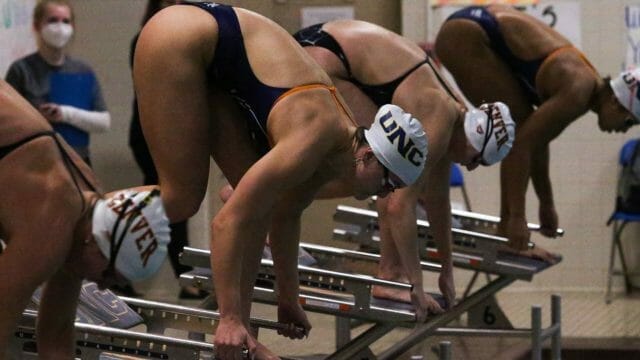 Dixie State is hosting the trailblazer invite in St. George, UT this weekend, featuring 10 other teams, making it one of the bigger-sized invites of the weekend.

The first day of the meet saw some speedy swims, including at least one that may be fast enough to earn a DI NCAA Championships invite. Northern Colorado’s Madelyn Moore had a breakout swim in the women’s 50 free, tearing to a 22.20 in finals to win the race handily. Moore had a best time of 22.50 entering the meet – a time which she set back at the 2019 WAC Championships. The 22.20 is a Northern Colorado team record, and there’s a very reasonable chance that time is fast enough for Moore to earn an invite to this year’s NCAAs.

Moore also helped the Northern Colorado women’s 400 medley relay to victory, providing a 55.09 lead-off split. Chelaine van der Westhuizen split 1:02.88 on breaststroke, Katelyn Bergin swam a 53.96 on fly, and Saana Liikonen anchored in 49.93. They touched the wall in 3:41.86 to hold off UCSD.

UCSD’s Spencer Daily and BYU’s Connor Stirling battled it out twice in the men’s 50 free. In prelims, Stirling clocked a 19.53 to take the top seed, while Daily swam a 19.86. Daily got the better of Stirling in finals, however, swimming a 19.62 to Stirling’s 19.63. San Diego had another swimmer break 20 seconds in finals, as Tyler James swam a 19.98 for 3rd place.

CSU Bakersfield’s Autumn D’Arcy took off in the women’s 200 IM, swimming a 1:59.77 to win the race by 2 seconds. D’Arcy used her superior front half speed to establish a lead over the field.