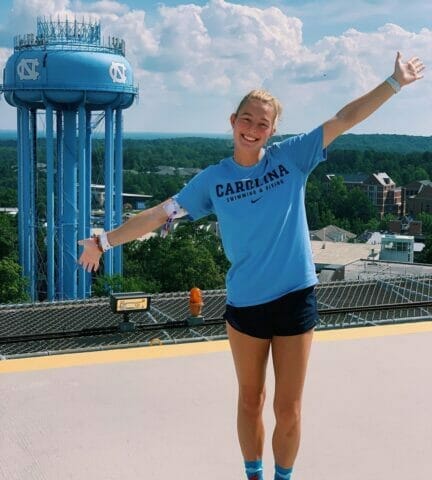 University of North Carolina diver Emily Grund announced on her Instagram page on Wednesday that her leukemia has been declared in remission.

Grund received an outpouring of support on social media from swimming and diving teams across the country and across the world after announcing that she had received a diagnosis of leukemia.

Grund posted videos and photographs on Instagram of her last day in the hospital. She was treated at the N.C. Cancer Hospital, which is the flagship site for UNC Cancer Care, and in true Carolina fashion the nurses celebrated her remission with powder blue pom-poms and other on-brand decorations.

Advancements in treatment and research has resulted in a dramatic increase in survival rates for leukemia over the last 5 years. According to data from the Leukemia and Lymphoma Society, five year survival rates have more than quadrupled since the early 1960s, with younger patients having even higher survival rates.

Grund now joins an estimated 400,000 Americans who are living with or in remission from leukemia.

Grund, who is in her senior season at UNC, has qualified for the NCAA Championships in each of her three seasons diving for the Tar Heels. At the 2021 championships, she finished 18th on both the 1-meter and 3-meter springboards, and 20th on platform.

Grund says that she does plan to return to diving and “finish out (her) career as strong as it started,” but a timeline for that return is still up in the air. She does expect to be able to work out throughout the 29 weeks of follow-up treatment starting in the next month or so.