No Kalisz, Szabo, Peaty, or Prigoda for ISL Playoff #2 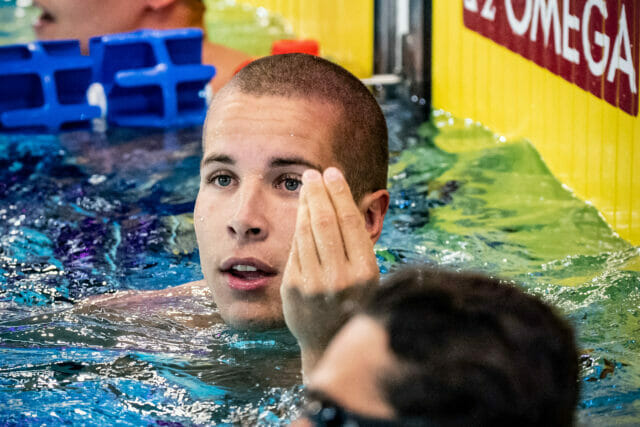 As was the case with Playoff #1 (Match #12 by the ISL’s count), the early story of Playoff #2 on Saturday is a number of notable absences.

Chief among those absences is both of London’s top breaststroker Adam Peaty and Kirill Prigoda.

With access to their full roster, the men’s breaststrokes are a strength for the Roar, but with no Peaty or Prigoda, that’s a big hole in the team’s lineup as they fight for a spot in the ISL finale for the third-straight season. Peaty, who missed the regular season due to his appearance on Strictly Come Dancing, is on the Roar’s roster, though the general belief is that he’s not expected to make any of the Playoff matches.

There were hopes for an appearance from Prigoda, though, which is arguably more important.

The other big name missing is Hungarian swimmer Szebastian Szabo of the Aqua Centurions. Last week, at the European Short Course Championships, he tied the World Record in the 50 fly. While no specific reason has been given for his absence (and Aqua is the only team that didn’t respond to requests for a full Playoff roster), the Hungarian team at the European Championships did face an outbreak of COVID-19.

This meet overlaps with the Hungarian National Championships, but Szabo hasn’t made an appearance there either.

Olympic gold medalist Chase Kalisz is also not in Aqua’s lineup for Playoff #2.

Aqua, even as the #6 seed and the best team in club history, still didn’t really have much chance to advance to the Finals, but the absence of Szabo, Kalisz, and a few others this weekend pretty much seals that fate.

The women’s rosters are much more intact: only really high-profile female swimmer is notably absent: Aqua Centurions’ Arianna Castiglioni is the fastest 100 breaststroker in the ISL this season, including ahead of Lilly King. Meet announcers talked about her still being on their heat sheets, so she must have been a very late scratch to the meet.

Other Names we noticed missing from day 1, though some could be at the meet and just have not been chosen among the 14-swimmer side for their team:

LA Current’s Tomoe Hvas is absent. He had to leave the European Championships early with a non-COVID absence. That’s a huge blow for the Current, who are in a near must-win scenario in Playoff #1 if they want to advance. The good news for them is that the top seeded team in the match, London, is also missing some swimmers, and the Current get Ryan Murphy back, so they still have a chance.
Aqua Centurions will be without their best backstroker Kathleen Dawson for the meet.
No Jay Lelliott for Toronto.
Aqua will also be without Fantine Lesaffre.
No Kenzo Simons for London Roar.

Top French swimmer Marie Wattel (London Roar) and Beryl Gastaldello (LA Current) are both absent from the 100 fly that will start the meet. Wattel is being used in only relays on day 1, while Gastadello will swim relays and the 50 free.
Kira Toussaint, the World Record and ISL Record holder in the 50 backstrokes, won’t swim the 200 backstroke – where she would’ve been a contender to win. Instead, she’ll swim the 50 backstroke and two relays.
Sydney Pickrem is only swimming the 200 IM at this meet. Twice this season, Pickrem has left an empty lane in an ISL event – once in Match 3 in the 200 IM, and once in Match 9 in the 400 IM, without any explanation from the London Roar staff. On Saturday, her schedule has been pared way back to just a single race.
Toronto’s Summer McIntosh, a young phenom and the best “value” draft pick of the ISL season, will swim only two races: a leg on Toronto’s “B” 400 free relay and the 400 free individually. That’s the schedule she swam at her two regular season appearances, with the 200 fly and 400 IM to come on day 2.
The versatile Emma McKeon, star of women’s swimming at the Tokyo Olympics, will swim the 100 fly, 50 free, and two relays