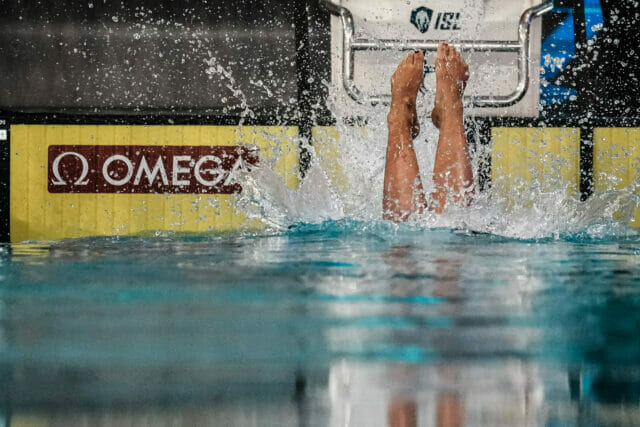 Short-staffed International Swimming League playoff teams have seemingly realized that swimming a random athlete in an off event — and potentially letting them coast through it — can save the team a few points over leaving an empty lane.

ISL teams automatically lose four points for leaving a lane empty in a given event. On Saturday, for example, the Toronto Titans accepted that penalty in the men’s 200 back, where Cole Pratt was missing due to shoulder soreness.

At the time, Toronto assistant general manager Dylan Kent said the team didn’t want to “sacrifice anyone’s performance from their primary events” by filling the lane with another available body. But on Sunday, with Pratt out again, the team opted to use breaststroker Tobias Bjerg in the 100 back and 100 IM and sprint freestyler Yuri Kisil in the 100 IM.

Bjerg, an Olympian, went 1:05.44 (30.49/34.69) in his 100 back, noticeably behind the field from the get-go. That was 15.95 seconds behind winner Ryan Murphy, who went 49.49 — but in addition to getting jackpotted, the team only lost one more point for missing the minimum time standard in the event. Had they left a lane empty again, that would have been an automatic -4.

In the 100 IM, Bjerg actually ended up with a relatively solid time, going 54.90 for sixth place, 3.05 seconds behind winner Thomas Ceccon. Kisil was eighth in 1:03.99, 12.14 seconds back. So again, the swimmers got jackpotted, but the team only lost 1 additional each instead of giving up 4 had it left a lane empty.

“Due to injuries and other needs of the roster there’s only so many swimmers you can fill holes with,” Kent told SwimSwam. “Tobias had to do a tough double and he stepped up and did all he could. The 100IM was a best time for him by 0.7.”

An event later, Aqua Centurions used Laura Taylor in the women’s 100 breast with Arianna Castiglioni sitting out. Taylor is a middle-distance freestyler and butterflier without any official breaststroke times on record and went 1:20.36 (37.69/42.67), 16.78 seconds behind winner Alia Atkinson. Again, Taylor got jackpotted, but only lost 1 additional point for missing the minimum cut, rather than 4 if the team had left her lane empty.

So, to review, as long as you have a swimmer available who can legally complete a race, it’s probably worth it to use them and hang on to three points.