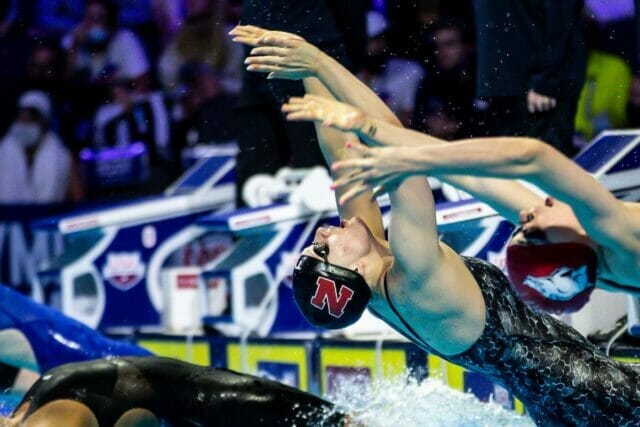 Nebraska and Kansas renewed their annual rivalry in Lincoln on Friday, with the Cornhuskers emerging victorious 192 to 106. The two programs have long been midwestern rivals, dating back to Nebraska’s time in the Big 12 Conference.

Leading the way for Nebraska was senior All American Autumn Haebig, who won the 200 and 500 free. In the 200, her signature event where she is the defending Big 10 champion, Haebig used a dominant back-half to take the win by over three seconds in a season-best 1:49.77. The Grafton, Wisconsin native then later returned in the 500 free to win in much tighter fashion, posting another season best of 4:57.79 to take the win after pulling away from Kansas’ Kara Church in the last 100. Church finished second in 4:58.74.

Also winning two events for the Cornhuskers was freshman Milica Opacic, a sprinter from Serbia. Opacic’s first individual win on the day came in the 100 free, where she used a quick opening 50 to take the lead and never looked back, touching in 51.00 for the win. Opacic returned later in the meet to win the 100 fly as well in a swift 54.95. Both swims were season bests for the freshman.

Madesyn Ronquillio also won two events for the Cornhuskers, sweeping the backstroke events. In the 100 back, Ronquillio outsplit the field by over a second on the back half to take an easy victory in 55.88. She returned a few events later to take the 200 back in dominant fashion as well, stopping the clock in a season best of 1:58.56, nearly five seconds clear of the field. Ronquillio’s season best 100 back stands at 55.48 from Nebraska’s dual meet with Iowa two weeks ago.

Nebraska also impressed on the boards, as senior All American Sarah Troyer swept both the one and three meter diving events. In the one meter, Troyer scored 294.23 points to put herself over 30 points clear of the field. In her signature board, the 3 meter, Troyer won by nearly 80 points with a score of 344.40.

The Kansas Jayhawks won two events on the day, both by senior Dannie Dilsaver. The Lincoln, Nebraska native, returning to her hometown while representing the rival Jayhawks, started off her day with a runner up finish in the 100 breast. She finished in 1:04.42 behind Nebraska’s Ella Stein, who took the victory in 1:04.18. Dilsaver would not be denied in her next two events, however, as she took the win in the 200 breast in 2:19.15 and the 200 IM in 2:05.77. All three of her races on Friday resulted in season bests.