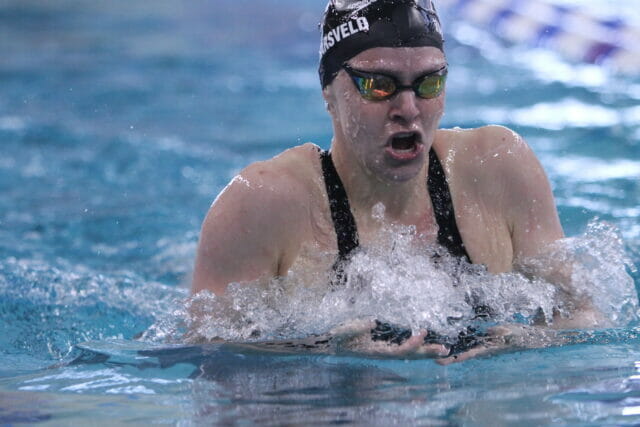 IUPUI is hosting their annual House of Champions invite this weekend, although it’s the other Indianapolis-based school that’s taken over the meet early. NCAA Division II U Indy is leading both the women’s and men’s meets heading into day 2, breaking 5 meet records in the process.

U Indy exerted themselves on the rest of the field in the men’s 50 free, going 1-2-3. Diego Mas got the win, swimming a 19.73, while teammate Victor Antonon Rodriguez came in 2nd in 19.82. Mas would have broken the meet record, except that Rodriguez swam a 19.64 in prelims, establishing the new meet record. Joao Silva touched 3rd in finals with a 19.93, after swimming a 19.90 in prelims. Rodriguez, Mas, and Silva are now the top 3 swimmers in the NCAA DII this season.

U Indy picked up another pair of individual wins on the night as well, putting a stamp on their stellar first night. Christian Hedeen won the men’s 500 free in 4:25.67, with teammate Sebastian Wenk touching 2nd in 4:25.78. Both swimmers clocked negative splits on the race, and stayed within half a second of each other throughout the race. The pair are now the top 2 swimmers in the DII rankings this season. Marizel Van Jaarsveld led a 1-2-3 charge by U Indy in the women’s 200 IM, winning the race handily in 2:00.32. Kaitlyn McCoy came in 2nd in 2:02.09, and Andrea Gomez took 3rd in 2:02.67. Van Jaarsveld lowered her own DII-leading season time with the swim.