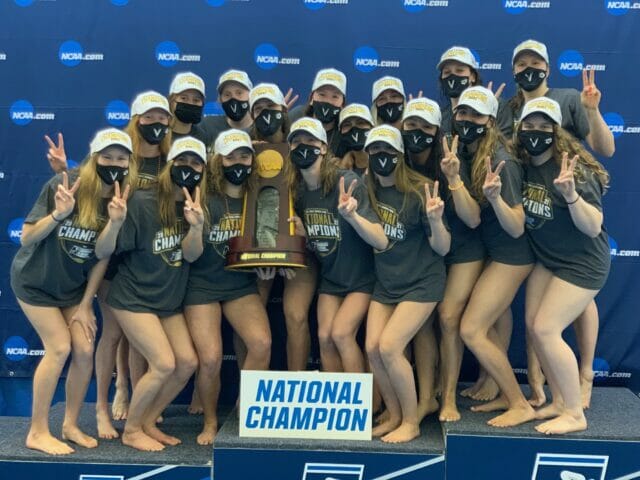 The 2021-2022 NCAA season brings a new element into the fold with the introduction of a 5th year of eligibility for athletes due to the complications resulting from the COVID-19 pandemic. This rule change means that swimmers and divers whose seasons were disrupted by the pandemic have the option to take advantage of an extra (5th) season of NCAA eligibility.

Naturally, the addition of 5th year swimmers and divers makes a significant impact on this season. It presents the possibility for teams to hang on to star swimmers/divers for an extra year, while simultaneously bringing in high-impact freshmen.

Many of the NCAAs top swimmers and divers from last year elected to use their 5th year of eligibility. There were some high-profile 2020-21 seniors that rejected the opportunity to come back. UVA’s Paige Madden, who won the 200, 500, and 1650 free at last year’s NCAA Championships, and was a member of Virginia’s winning 800 free relay, declined to come back to the NCAA for a 5th year. It’s possible part of Madden’s decision may have come from a desire to shift into a more meters-focused phase of her career. She’s coming off an incredible summer, where she qualified for the U.S. Olympic Team in the women’s 400 free, and was a member of the U.S. 4×200 free relay, winning a Silver medal. Madden is also now competing in the ISL.

Similarly, Cal’s Ryan Hoffer, who won the men’s 50 free, 100 free, and 100 fly at last year’s NCAAs, has concluded his NCAA career and is now in the ISL. Some other swimmers who declined their 5th year eligibility and are now in the ISL include Georgia’s Camden Murphy and Javier Acevedo. Ohio State’s Paul DeLakis didn’t use his 5th year of eligibility, and announced his retirement from swimming.

Here is our list of the 5th year swimmers and divers in the NCAA this season (2021-2022). The list includes Power 5 programs and mid-major teams that scored at NCAAs last year. It’s sorted alphabetically by school. If we missed an athlete, feel free to let us know down below.

Notably, nearly all Power 5 programs (ACC, Big Ten, Big 12, Pac-12, SEC) have at least one 5th year athlete on their roster. Interestingly, one of the teams that doesn’t have any 5th years this season is the defending women’s NCAA champions Virginia. The Cavaliers had seniors Paige Madden, Kyla Valls, Jocelyn Porter, and Caroline Gmelich on their NCAAs roster last year, and none will be back this season.

This is an example of how the introduction of 5th years changes the dynamics of NCAA swimming & diving. UVA won last year’s title by a huge margin, so graduating a few swimmers normally wouldn’t necessarily be a huge deal. On the other hand, NC State and Texas both return key 5th years, and Stanford returns Brooke Forde, finally gets Taylor Ruck back, and brings in a show-stopper of a freshmen class.