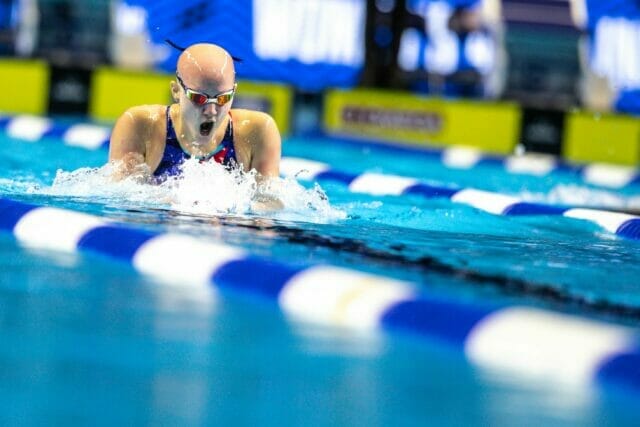 The 2021 Girls Illinois HS Swimming & Diving State Finals didn’t disappoint as four Illinois HS state records were broken, with three of them coming from sophomores who are new faces to the state meet. The Illinois HS State Finals weren’t held during the 2020-2021 season due to COVID-19.

Arguably one of the most anticipated races of the state meet was between USA Swimming National Junior Team members Leah Hayes and Carly Novelline. Novelline primarily swims the sprint freestyles and backstroke, while Hayes is an IM specialist which helps her to be competitive in all four of the stroke disciplines. Both Hayes and Novelline were selected to travel with Team USA to the FINA World Cup stops in Berlin and Budapest.

Many had thought that Novelline would be the clear favorite in this event as she’s the fastest 18&U female 100-meter freestyler in the nation and boasts a personal best of 48.16 in the yards event. Coming into this season, Hayes hadn’t even broken 50 seconds in the event. However, after Hayes had set the fastest time in the state out of sectionals last week (49.78), it was clear that Novelline would be challenged in Westmont.

Hayes and Novelline were clearly the two fastest out front, splitting 23.26 and 23.35, respectively, to the feet. Hayes was able to hang on as she had the better back-half, splitting 25.08 compared to Novelline’s 25.67. Hayes won the event in 48.35 seconds, which bettered her state-record setting performance from the day prior.

This marks Hayes’ second state title (and state record) of the afternoon as she re-broke the 200 IM record (1:56.38) earlier in the session. In that race, her margin of victory was over 5 seconds that of Schaumburg’s Nina Mollin, who was one of the fastest 18&U IMers at Canada’s Olympic Trials.

Hayes is currently a sophomore at Kaneland Maple Park High School. Her high school doesn’t have a swim team, so she’s able to swim club with the Fox Valley Park District Riptides while representing Kaneland at large IHSA competitions. Kaneland was able to finish 14th overall in the team ranking solely from Hayes’ two individual victories.

While Novelline was unable to secure a victory in the 100 free, she was able to defend her 100 backstroke title from two years ago. Novelline won the race on Saturday in 53.46 seconds, splitting 25.52/27.94 and using her high stroke rate and underwater dolphin kicks to power through the field.

Novelline earned two more state titles on Saturday as a member of New Trier’s relays. In the first event of the session, Novelline blasted a 24.44 leadoff backstroke split on their 200 medley relay which ended up shattering the IHSA record (1:39.65) and winning by almost four seconds. No previous girls medley relay in Illinois HS history had ever been under 1:40.

Novelline also helped New Trier come from behind in the 400 free relay, as prior to her entering the water, the Trevians were sitting in the fourth position. She split 48.95 on the anchor leg to power past St. Ignatius, St. Charles North, and Barrington, who had a two-second lead on New Trier at the 300 mark.

Novelline, who will swim at Virginia next fall, ends her Illinois HS swimming career as one of the most decorated female athletes in state history, amassing 12 state medals and 5 titles in both individual and relay performances. In addition, she helped lead New Trier to their first team state championship since 2013, which was their 14th overall, the most of any school in Illinois HS history.