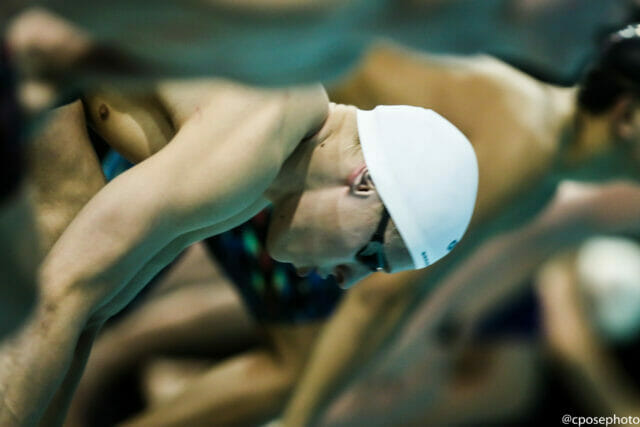 Teams from across the greater midwestern United States, including Nebraska, Illinois, Wisconsin, South Dakota, Minnesota, Missouri, and Colorado, traveled to Iowa over the weekend for a high-level showdown at the 2021 Midwest Challenge.

Among the big names in attendance was Nate Germonprez from the iNspire Swim Team in Omaha. Germonprez, the #3 recruit in the high school class of 2023 (current juniors), verbally committed to Texas two weeks ago. Like so many swimmers have done this fall, that verbal commitment accompanied a number of significant time drops.

That 100 free improvement dramatically raises his value for the Texas Longhorns. The team’s top two 100 freestylers this season, Drew Kilber and Daniel Krueger, are both seniors. In fact, their four best will have exhausted their usual four years of eligibility before Germonprez arrives, with the other, Caspar Corbeau, having the 5th-year option remaining when Germonprez is a freshman. 5 of their top 7, in fact, are in the same boat.

The best battles of the meet came in the boys’ breaststroke races, where Germonprez’s and his teammate Kael Mlinek squared off against 15-year old Joshua Chen of the Ames Cyclones.

Chen, even in the younger end of the age group, now ranks in the top 100 all-time among 15-16 boys in the breaststrokes. In the 100, he ranks 36th-best all-time, which is one spot behind Olympic medalist Cody Miller, and in the 200 he ranks 51st all-time.

The 100 is the best time by a 15-year old nationally this season by more than a second and a half, and is the 7th-best in USA Swimming’s database back to at least 2010 – behind a list that includes names like Reece Whitley and Michael Andrew.

Waukesha Express had most of the top performances by power points on the girls’ side of the meet, led by the duo of 13-year olds Ella Antoniewski and Emmy Meyer. The two combined for 15 personal bests in the meet, with Antoniewski scoring 8 and Meyer 7.

She finished in the top 3 of all of those events, including winning the 50 and 100 freestyles in open-age competition.

While those young swimmers had the best swims by power points, it was a local swimmer, host iFly’s Heidi Stalkfleet, who picked up the biggest pile of hardware.

Stalkfleet won 6 individual races in total, with the only blemish being in the 100 free behind the aforementioned Antoniewski (though Stalkfleet had the top time in prelims).

Stalkfleet, a high school senior, is committed to the University of Georgia for next fall. As her freestyle range expands from 100-1650, she becomes a more-and-more obvious fit for the kind of swimmer that Georgia head coach Jack Bauerle has had so much success with in his decades in Athens.

That swim gave Stalkfleet the Women’s High Point Award for the meet.

iFly’s Holden Carter won the 100 fly in a new season-best time of 49.91, which accompanied lifetime bests in 4 other events (that he didn’t win). That mark is a new 15-16 team record for the club. He was one of three iFly team records broken at the meet: Hayden Hakes broke the 13-14 boys’ 200 backstroke record in 1:52.99, where he was the youngest swimmer in the top 16 finishers, and Missouri S&T Jordan Christensen broke the team record in the 100 breaststroke with a 56.08 to win the B final.
16-year old Annika Finzen of the Kansas City Blazers won the 100 back in 55.76, and the second-best time was 14-year old Addy Herl in prelims in 55.94.
Isaac Fleig, who makes his home in Wisconsin but had been training with Mission Viejo, swam several lifetime bests, most notably a 1:48.77 to win the 200 fly. His future college team, the University of Kentucky, is strong in that event Mason Wilby, the school record holder in the 200 fly placed 4th at last year’s SEC Championships, though he’ll be out of eligibility by the time Fleig arrives on campus.