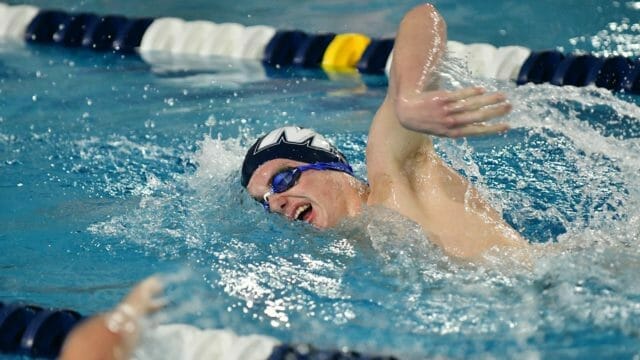 WEST LONG BRANCH, NJ – The Monmouth University men’s swimming team earned a convincing victory over visiting Iona on Friday afternoon at Steadman Natatorium.
The men won by a 162-100 final score, while the women’s team fell, 141-121, in a meet that was decided by the final relay.

Freshman Georgia Watkins won three individual races and broke two of her own school records, while Callan Smith paced the men’s team with three wins of his own in addition to anchoring a victorious relay.

NOTES & QUOTES
“Overall, I am really pleased with the way the team performed tonight. There was definitely a lot of energy in the group and you could see that in the way they swam in a lot of tight races between two closely matched teams.

Both teams have done a good job this year in conference meets and these are teams that we will see at the end of the year. The more they can be in these high-leverage situations and in tough meets, the more it prepares for the end of the season. The team has been really consistent in their approach and keeping an even keel in executing what we practice on a daily basis.

I am excited about the results, am looking forward to another conference meet next week and seeing us continue to progress.”
– Monmouth head coach Matt Nunnally

Callan Smith led the men’s team with three first-place finishes in the 100 back (51.07), 200 back (1:52.79) and 200 IM (1:57.21). Smith increased his career victories total to 64 including nine this year.
Georgia Watkins broke her own Monmouth school records in the 1000 free and the 200 fly.
Watkins’ time of 10:47.13 set a new Monmouth record in the 1000-yard freestyle. It was nearly two seconds faster than her previous school record set in the season opener.
Watkins also set the 200 fly record with a time of 2:07.51.
Watkins turned in a third first-place performance with a time of 5:18.22. Watkins now has five first-place efforts in her freshman season.
Camryn McHugh took the top spot in the 100 back (58.94) and 200 back (2:08.39). McHugh has six wins in 2021-22 and 46 for her career.
Sean Cook, Blake Reynolds, Thomas From, Nate Heisey, Alexandra Ho and Jensen Ritter each earned first-place finishes.
Cook’s win in the 100 breast (58.50) was his third career win and second this year.
Reynolds won his first event of the season, the 50 free (21.66), and the 18th win of his career.
From collected his second win this year when clocked in at 47.80 in the 100 free. It was his eighth career victory.
Heisey won the 200 breast in 2:12.89 for his first win this year and the sixth of his career.
Alexandra Ho touched the wall first in the 50 free (24.61) to secure her fifth win of the season and 21st of her career.
Freshman Jensen Ritter won the first event of her career when she led the field in the 100 fly (58.31).
Monmouth’s women won the 200-yard medley relay as Camryn McHugh, Tahlia Botha, Jensen Ritter and Corinne Pepper combined to win the race in 1:51.80.
The men also won the 200-medley relay when Kevin Del Giorno, Sean Cook, Blake Reynolds and Dylan Barkhuizen finished in 1:33.83.
Monmouth’s men won the 400-yard freestyle relay with a time of 3:08.66 as Thomas From, Cole Dyson, Dylan Barkhuizen and Callan Smith combined for the win.

UP NEXT
Monmouth will be back at home next Friday afternoon when it hosts Manhattan at 3 p.m. The women will also compete against the Jaspers in addition to Siena.

WEST LONG BRANCH, NY – Sparked by a combined five individual wins from Juniors Isabella Nicholson and Julia Moser, the Iona College women’s Swimming team rushed back from as many as 19-points down to defeat the Monmouth University Hawks in Long Branch, New Jersey Friday night. The win raised the team’s record to 5-1 for the season, after the 141-121 win.

The night saw the Iona women’s breaststroke corps continue their strong work. Moser, a junior, took the top spot in the 100 and 200-Breaststroke events at 1:09.33 and 2:29.82, respectively. Megan Josephs and Kate DiRaimo took third and fourth in the 100-yard race and second and fourth in the 200-yard edition. “Those were big races for us,” noted Cavataro. “Monmouth’s Talia Botha – who won the 200-Breast at the last MAAC Championships was back in the water for the first time this season racing, and Moser, Josephs and DiRaimo were big!”

Speaking of Isabella Nicholson, Cavataro, commented, “Bella is building on her strong swimming last spring and training very well and it is paying off in her races. She is a threat in any of the freestyle events and her individual medley work is really coming together.”

Nicholson claimed wins Friday in the 100 and 200-yard Freestyle events with respective times of 52.97 and 1:56.27, just off of her lifetime best efforts from last spring. However, it was the back half of her 200-yard Individual Medley race that “continues to impress,” noted Cavataro. Nicholson posted a 36.32 Breaststroke leg to take control of the race and help the trio of Taylor Spillman and Isabella Pabon to a 1-2-3 win and set up the decisive 400-yard Freestyle Relay event.

“You have to give credit to Monmouth today, they really raced well. They attacked every event and we came up short today. We will be better the next time we see them, noted Cavataro.

The teams go on the road next Friday November 12th, as they travel to Binghamton University for the first time in program history.